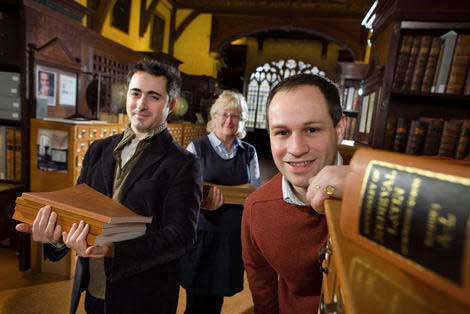 A century after scholars began working on it, the Oxford University-based Dictionary of Medieval Latin from British Sources is finally complete.

The Dictionary contains more than 58,000 entries across nearly 4,000 pages and is the most comprehensive study ever produced of the vocabulary of Latin in the medieval period in Britain. The final part was published on 11 December by the British Academy.

Dr Richard Ashdowne, editor of the Dictionary and a member of Oxford University’s Faculty of Classics, said: ‘This is the first ever comprehensive description of the vocabulary of the Latin language used in Britain and by Britons between AD 540 and 1600.

‘For the last hundred years, the project has been systematically scouring the surviving British medieval Latin texts to find evidence for every word and all its meanings and usage.

‘Much of this fundamental work was done in the early years of the project by a small army of volunteers, including historians, clergymen, and even retired soldiers. They provided the project with illustrative example quotations copied out from the original texts onto paper slips – an early form of crowdsourcing that had previously been used in the preparation of the Oxford English Dictionary.

‘During its existence the project has accumulated an estimated 750,000 such slips. Nowadays, in addition to this invaluable resource, which covers a vast quantity of material only available in the form of the original manuscripts, we also have access to large electronic databases enabling us to examine the works of authors such as the Venerable Bede more thoroughly than ever before.’

The story of the 17-volume Dictionary begins on 6 April 1913, when a Mr Robert J. Whitwell had a letter printed in The Times in which he called for volunteers to help compile a new dictionary of the Latin used in medieval times.

The Dictionary eventually moved to the Bodleian Library before being adopted by the Faculty of Classics at Oxford.

Letters A and B were covered in the first part, published in 1975, with entries published today including zythum, ‘an Egyptian beer’.

Professor Tobias Reinhardt, Corpus Christi Professor of Latin at the University of Oxford and chairman of the British Academy’s Medieval Latin Dictionary Committee, added: ‘The completion of the Dictionary of Medieval Latin from British Sources is a symbol of the resilience of the humanities in Britain.

‘The importance and usefulness of dictionaries are often forgotten by the public, in the same way as people forget the word-processing software they use day-to-day. Dictionaries enable us to track and understand the development of language and are useful not just today, but for future generations as well.’

The project has been overseen by the British Academy since 1913 and is now jointly funded by the Arts and Humanities Research Council, the Packard Humanities Institute, and the John Fell OUP Research Fund.