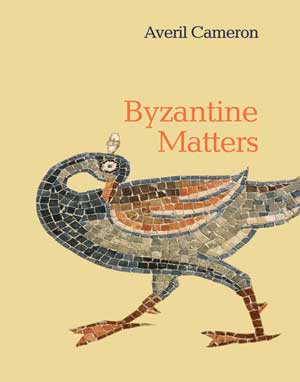 A. Cameron, Byzantine Matters (in print)

Reconsidering the place of Byzantium in Western history and imagination

For many of us, Byzantium remains “byzantine”- obscure, marginal, difficult. Despite the efforts of some recent historians, prejudices still deform popular and scholarly understanding of the Byzantine civilization, often reducing it to a poor relation of Rome and the rest of the classical world. In this book, renowned historian Averil Cameron presents an original and personal view of the challenges and questions facing historians of Byzantium today.

The book explores five major themes, all subjects of controversy. “Absence” asks why Byzantium is routinely passed over, ignored, or relegated to a sphere of its own. “Empire” reinserts Byzantium into modern debates about empire, and discusses the nature of its system and its remarkable longevity. “Hellenism” confronts the question of the “Greekness” of Byzantium, and of the place of Byzantium in modern Greek consciousness. “The Realms of Gold” asks what lessons can be drawn from Byzantine visual art, and “The Very Model of Orthodoxy” challenges existing views of Byzantine Christianity.

Throughout, the book addresses misconceptions about Byzantium, suggests why it is so important to integrate the civilization into wider histories, and lays out why Byzantium should be central to ongoing debates about the relationships between West and East, Christianity and Islam, Catholicism and Eastern Orthodoxy, and the ancient and medieval periods. The result is a forthright and compelling call to reconsider the place of Byzantium in Western history and imagination.

Averil Cameron is professor emeritus of late antique and Byzantine history at the University of Oxford and former warden of Keble College, Oxford. Her books include “The Mediterranean World in Late Antiquity”, “The Byzantines”, and “The Later Roman Empire”.