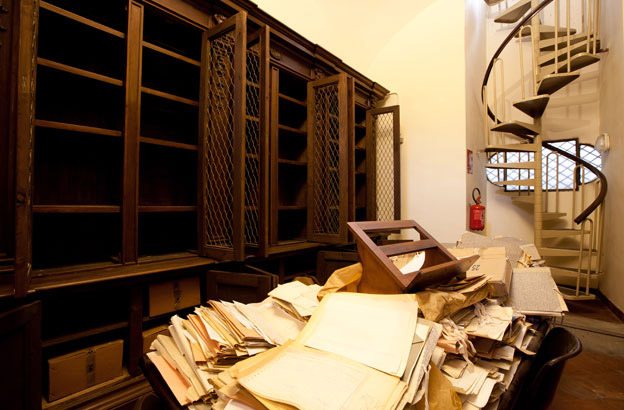 Naples’ Girolamini: The looting of a 16th Century library

Book-lovers around the world have been helping investigators trace thousands of rare volumes looted from one of Italy’s oldest libraries by a gang of thieves including the librarian himself. While most have been recovered, a number of invaluable 15th and 16th Century books are still missing.

Once containing works of extraordinary value (including a 1518 edition of Thomas More’s Utopia, Galileo’s 1610 treatise Sidereus Nuncius and a copy of Johannes Kepler’s Astronomia Nova), Biblioteca Girolamini, hosted in a 16th Century church complex in the heart of Naples, has been systematically looted throughout the centuries. The library was closed to the public for years.

When art historian and academic Professor Tomaso Montanari managed to gain access to it back in 2012, he was shocked by the book collection’s and the library room’s devastating condition.  “There were books spread around everywhere – on the floor, on the stairs, on tables. There was garbage – soda cans and papers – on the floor. It was total confusion, a situation of major decay. One of the library’s members of staff took me aside, away from the CCTV cameras, and said: ‘Professor, the director has been looting the library!'”, Montanari recalls.

Montanari wrote an article for the Il Fatto Quotidiano newspaper, exposing the library’s director, the now infamous Marino Massimo de Caro, who was later arrested. A well-known figure in bookselling circles, with no formal qualifications, de Caro had been in charge for the library due to some kind of political cover he had, which enabled him over the years to reach positions of responsibility in institutions more or less controlled by the Ministry for Culture.

“Our investigations found that there was a true criminal system in action. A group of people…carried out a devastating, systematic looting of the library”, says Major Antonio Coppola, a police chief who is leading the operation to recover the stolen texts and who describes De Caro as the head of a ring of thieves, who would go to work in the evenings after turning off the library’s limited CCTV monitoring system. Seals identifying the manuscripts as part of the Girolamini collection were removed. In some cases they were just torn out, leaving the book seriously damaged. Stripped of evidence of their origin, the volumes were put on the Italian and international markets. Five-hundred books went to a German auction house, which gave the thieves a million euros (£840,000 or $1.4m) in advance for the batch. They would have received more cash if the sale had gone through.

Remarkably, just 18 months after the looting was discovered, police investigators believe that they have already managed to track down the great majority of the stolen books. Coppola has been contacted by concerned traders and collectors from across Europe, the US and Latin America. Among the many books gathered up were some returned by the former Italian Senator and well-known bibliophile, Marcello Dell’Utri, a close associate of former Prime Minister Silvio Berlusconi.

The Ministry of Culture says that it has plans to restore and re-open the library in a process that could take a year to complete. But the head of Italy’s Antiquarian Booksellers’ Association, Fabrizio Govi, has his doubts, fearing that nothing will really change, and that the magnificent old Biblioteca Girolamini will never be properly restored to its former glory.