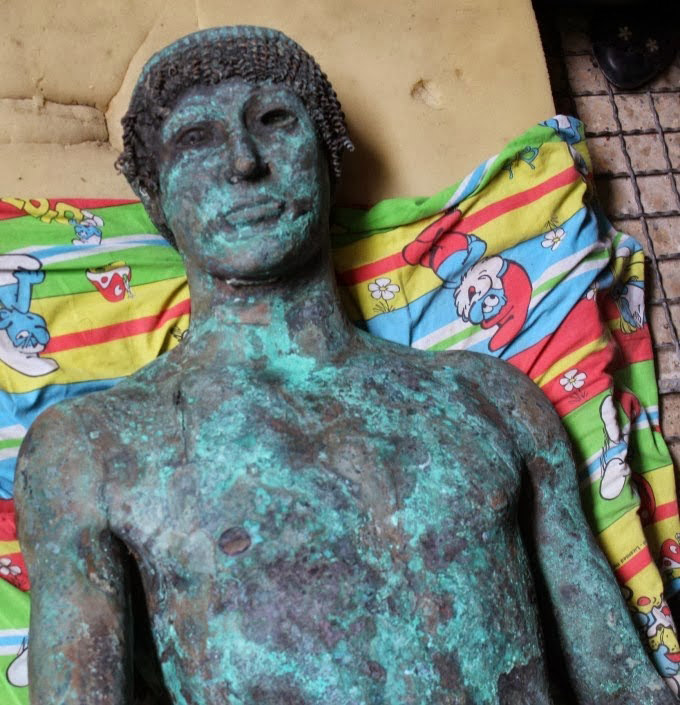 A Bronze Statue in Gaza

And the mystery around it

A bronze statue representative of Greek art and identified as depicting the Olympian god Apollo was seized by Hamas-led police in the Gaza strip, only to vanish from view.

The statue’s discovery was announced by police officers belonging to the Islamist group Hamas, which rules the isolated Palestinian territory. Unofficial images of the statue issued by Palestinians and reproduced by Reuthers present the statue unceremoniously lying on a worn mattress covered with a set of Smurf decorated bedsheets.

The statue represents a youthful athletic man standing upright on two, muscular legs; he has one arm outstretched, with the palm of his hand held up. He has compact, curly hair, and gazes out seriously at the world, one of his eyes apparently inlaid with a blue stone iris, the other just a vacant black slit. Archaeologists have not managed to view the statue in order to provide support of its authenticity or technical details. From what can be seen, it could be dated somewhere between the 5th and the 1st century BC.

Both the past and the future of the statue is a mystery. One of the two stories regarding its discovery involves 26 year old Joudat Ghrab, a local fisherman who found it lying on the sea bed last August and then carried it home. Believing it might have gold elements, Ghrab removed one of the statue’s fingers to take it to a metal expert, while one of his brothers did the same with another finger.

“I felt it was something gifted to me by God,” Ghrab told Reuters. “My financial situation is very difficult and I am waiting for my reward.”

Family members who realized the statue’s importance tried to sell it on eBay with a $500,000 (£300,000) price tag, mysteriously inviting potential byers to come and collect it from Gaza -despite the place being famously virtually inaccessible to outsiders due to rigid controls on behalf of Israel and Egypt. There was when the police found out about the statue and seize it.

An alternative story comes from expert Jean-Michel de Tarragon, a historian with the French Biblical and Archaeological School of Jerusalem. Based on the statue’s images, de Tarragon suggests that it was uncovered on land and not in the sea, speculating that the true location of where it was unearthed was not revealed to avoid arguments over ownership. “This wasn’t found on the seashore or in the sea… it is very clean. No, it was [found] inland and dry,” he said, adding that there were no signs of metal disfigurement or barnacles that one normally sees on items plucked from water.

Ahmed al-Bursh, Gaza’s tourism ministry director of archaeology, supports Ghrab’s story, saying that the statue has been found at sea. He also states he has seen the statue, promising that Ghrab would receive a reward once the issue had been resolved.

Other officials at the ministry avoid to reveal the statue’s current location, adding that it will not be shown to the public until a criminal investigation into who tried to sell it is completed.

On the statue’s future, Bursh says, “International institutions have also contacted us and have offered to help with the repair process,”, adding that a museum in Geneva and the Louvre in Paris wanted to take it on loan.

Still, the most important thing by now is for the statue to reappear. Once it is released and studied by experts, it will be possible to say whether it represents, “the tip of a historical iceberg”, a new Riace case or another archaeological scandal.