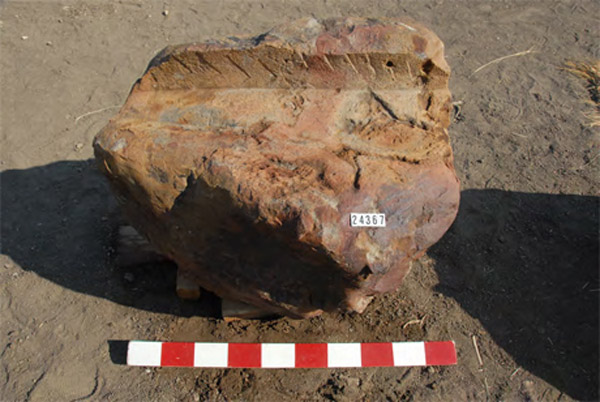 Fragments belonging to the Northern one of the two colossal statues of Amenhotep III known as ‘Memnon Colossi’ have been discovered in Kom el Hetan, West Thebes, Egypt.

Led by renowned Egyptologist Hourig Sourouzian (head of the Amenhotep III Temple Conservation Project) , the archaeological team working continuously at the site where the vast funerary temple of Amenhotep III was built around 3,350 years ago, has managed to reveal several quartzite blocks which come from the well-worn statue and identify them with parts of its arm, belt and skirt as well as its crown. According to a statement by the Minister of Antiquities Mohamed Ibrahim, the pieces had fallen from the statue since Antiquity, during an earthquake that destroyed what had remained from the (even then, largely pillaged) temple and gave the Colossi, once flanking the entrance to the temple, their current appearance.

According to Aly El-Asfar, head of the Ministry’s ancient Egyptian antiquities section, the blocks are to be added to the Colossus again.