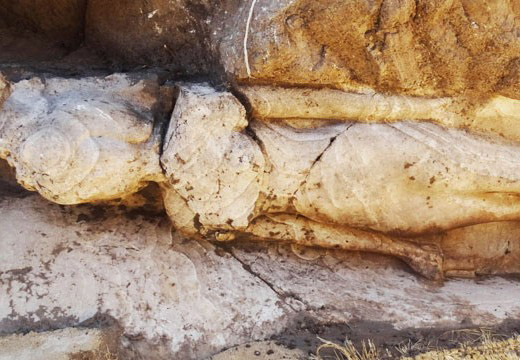 The authorities speak of unique, so far, depiction of this princess alone with her father

A sculpted image of Princess Isis, daughter of Pharaoh Amenhotep III was recently unearthed within the area of the King’s funerary temple in Kom el-Hetan, on the western bank of the Nile near Luxor, Egypt. The sculpture formed part of a 14-m. alabaster seated statue of her father, once covering the space between the legs of the royal figure. The discovery was announced last Friday by the Egyptian Antiquities Ministry.

The statue was unearthed in the framework of the “Colossi of Memnon and Amenhotep III Temple Conservation Project at Kom el-Hetan” led by Dr. Hourig Sourouzian. According to the Ministry’s formal announcement,  the statue is 1.7 m. high, bearing the princess’ name and titles inscribed near her feet, while the authorities believe this is “the first known representation of Iset alone with her father”. The statue’s face has suffered from erosion.

Princess Isis (Iset) is one of the four known daughters of Amenhotep III and his chief wife, Queen Tiy, alongside Sitamun, Nebetta and Henuttaneb. It is not known also whether a certain King’s Daughter named Beketaten, known from monuments at Tell el-Amarna as being daughter of Tiy, was a fifth daughter of Amenhotep III or one of the four others who changed her name during the Amarna period to fit the change of religion.