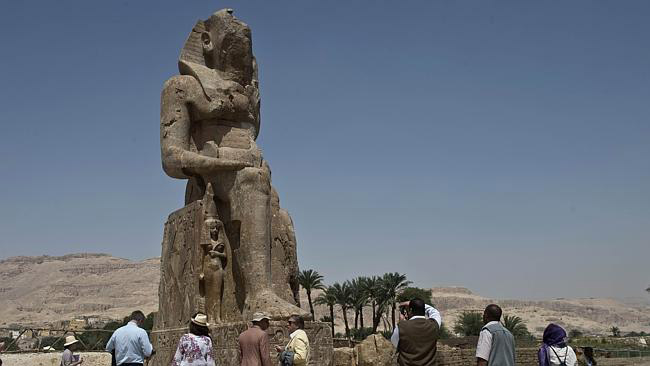 Four Colossi from now on

Two colossal statues of Pharaoh Amenhotep III recently revealed by archaeologists led by Dr. Hourig Sourouzian in Kom el Hetan, in Luxor, Egypt, have been finally raised again, adding to the well-known pair known as “The Colossi of Memnon”.

The two statues, each made of a single piece of red quartzite, have been raised at what is believed to be their original site, where the pharaoh’s memorial temple used to tower during antiquity. Plundered since antiquity due to its excess of building material, the temple ceased to exist, being signified only by a single pair of colossal statues known as “The Colossi of Memnon”. Still, many of its relics still remained on the ground or underground ans it is up to Dr. Sourouzian’s team to unveil them.

“The world until now knew two Memnon colossi, but from today it will know four colossi of Amenhotep III,’’, said Dr. Sourouzian.

As reported by AFP news agency, one of the “new’’ statues — its body weighing 250 tonnes — again depicts the pharaoh seated, hands resting on his knees. It is 11.5 metres tall, with a base 1.5 metres high and 3.6 metres wide. Archaeologists said with its now missing double crown, the original statue would have reached a height of 13.5 metres and weighed 450 tonnes. The king is depicted wearing a royal pleated kilt held at the waist by a large belt decorated with zigzag lines.

In the past, the site has given spectacular examples of late 18th Dynasty colossal statuary, including the group statue depicting the Amenhotep III, his main wife Tiy and three of their daughters, which now adorns Cairo Museum’s main hall. Still, the newly found statues are one of the few examples which have been restored to their orginal site.