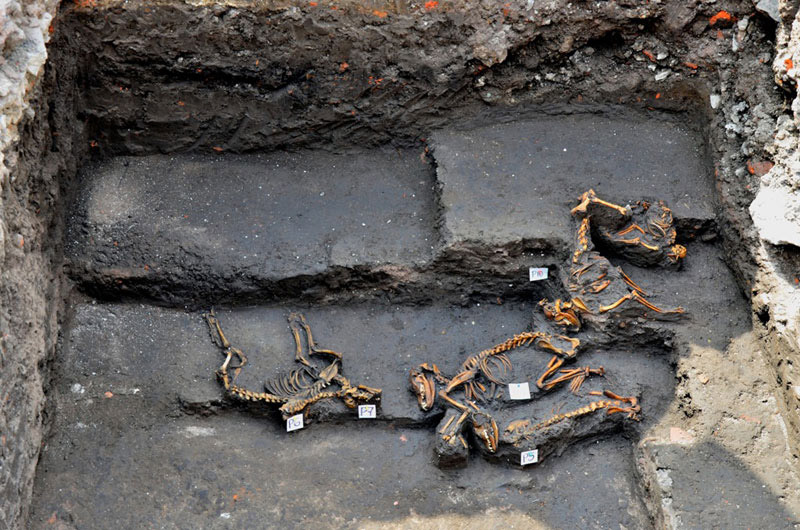 The Riddle of Aztec Dog Burials

Group burial of dogs found in the area of Azcapotzalco, Mexico

Twelve dogs placed 500 years ago in an Azteca III context (1350 to 1520 AD) in Azcapotzalco (Northwest Mexico City) have puzzled the archaeologists from the National Institute of anthropology and history (INAH) who brought them to life since, unlike similar cases from the past, the group is not associated with human burials or a sanctuary.

“Burials of dogs have been found in archaeological contexts, but in this case, it is not associated with any construction or a human burial. Without a doubt this is a special find, by the number of individuals and we have not found a link with a building or a deceased person.”, explains archaeologist Rocío Morales Sanchez, adding that the research team is to dig deeper in order to find any evidence underneath the known deposit.

The animal remains, which have been classified as representing a common type of dog were found in a very good condition. They are of medium size, various ages and keep most of their teeth intact. In fact, the group is so common that archaeologists cannot define any burial pattern represented through it.

The group were dated through pottery found alongside it, showing elements of manufacture which characterize Aztec pottery between mid-14th to mid-16th c. AD. The period, known as Postclassic, singifies the height of Aztec rule in the area. From the aspect of chronology, as well as associated finds (pottery), the dog group burial is connected with the remains of a household, containing ceramics, bone needles and obsidian stone tools, located a few years ago in the eastern part of the same land. Within the household archaeologists had also located human burials and remains of ancient canals.

According to INAH archaeologist Antonio Zamora, especially important finds from the household site included an omichicahuaztli (percussion instrument) carved out of a human femur, as well as another musical instrument made of a dog humerus. As for the burials, the remains of an infant of about three years old from the Prehispanic era along with food waste consisting of the bones of dog and turkey came to light in one clay layer. As the area is located in close proximity to the shoreline of Lake Texcoco, the archaeologists had concluded that the Aztecs had used waste aiming to raise the ground level in order to prevent flooding.