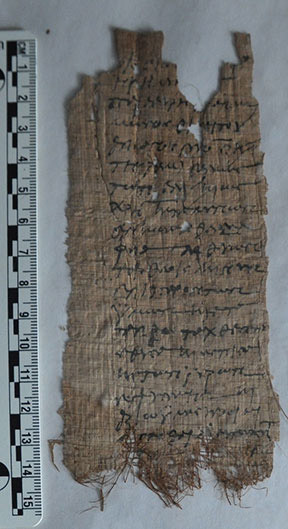 The One Who Got Away: Papyrus Confirming State Cult Affiliation Discovered

The record, known as libellus, is connected with the persecution of Christians by Emperor Decius

A Roman papyrus connected with the practice of sacrificing to the idols as a declaration of loyalty to the Emperor, mostly known through Christian litterary tradition connected to martyrdom, has come to light during archival research in a University library in Iowa, US.

Dating from the time of Emperor Decius, the papyrus forms part of a collection of nine ancient documents of Egyptian provenance which ended up in the Library of Luther College (Decorah, Iowa), as part of the archive of the late Classics Professor Orlando Qualley, a former member of an archaeological expedition to Karanis, Egypt (1924-25), who served as the College’s first vice president (1934) and then dean (1946-1964). Donated in the Library in 1980, the archival material was stored in a box, lost and forgotten, to come to light again now, when Luther College student Brittany Anderson came across it during an examination of the late professor’s papers.

All nine papyri, written in ancient Greek, measure from 5 to 20 centimeters in length and are in remarkably good shape, though all are fragmentary and quite fragile. Still, among them, there is one that draws a particular attention due to its content: a text that allows reserchers to identify it as a “libellus“.

A libellus was a formal document which was customarily given to anyone who had accepted to sacrifice to the idols, following an imperial command, during the Roman period. The practice is closely linked to the subject of state-led Christian persecutions, which is well-attested in Christian litterature as a form to demonstrate the themes of martyrdom and sainthood. While a martyr ( in Greek μάρτυρας=witness) is one who dies declaring their faith to Christ as one and only God (thus denouncing the idols as multiple gods), a libellus holder was exactly the opposite: one who had accepted to sacrifice to the idols and had been granted safety due to their obedience to the emperor.

The Luther College libellus bears the name of Aurelius Ammon, a servant of the well-attested Aurelius Appianus, a leading citizen of Alexandria, Egypt and it indeed declares that Aurelius Ammon has sacrificed “in accordance with the orders” of the emperor.

According to University of Michigan papyrologist Graham Claytor, the Roman ruler of the time has to be identified to Emperor Decius, who performed the first Roman persecution of Christians in 250 AD, in in the form of a decree that year ordering all inhabitants of the empire to offer a sacrifice to the gods as a show of loyalty. Many citizens, including Pope Fabian, were arrested, tortured and executed after refusing to obey the decree as being Christian. But not Aurelius Ammon. We will never know if he had practiced Christianity at some point in his life or he was indeed a polytheist. At any case, he was granted his libellus and probably continued living peacefully in Alexandria. At some point, his document probably ended up in a records’ collection in Theadelphia, in Egypt’ s Fayoum region. As for the late Prof. Qualley, he probably bought it, along with eight more papyri, from an antiquities dealer during his stay in nearby Karanis.

For the time being, the libellus and the rest of the collection is studied thoroughly, while Luther College plans to work to preserve all the Qualley papyri and make them available online in digital format to scholars and people around the world.