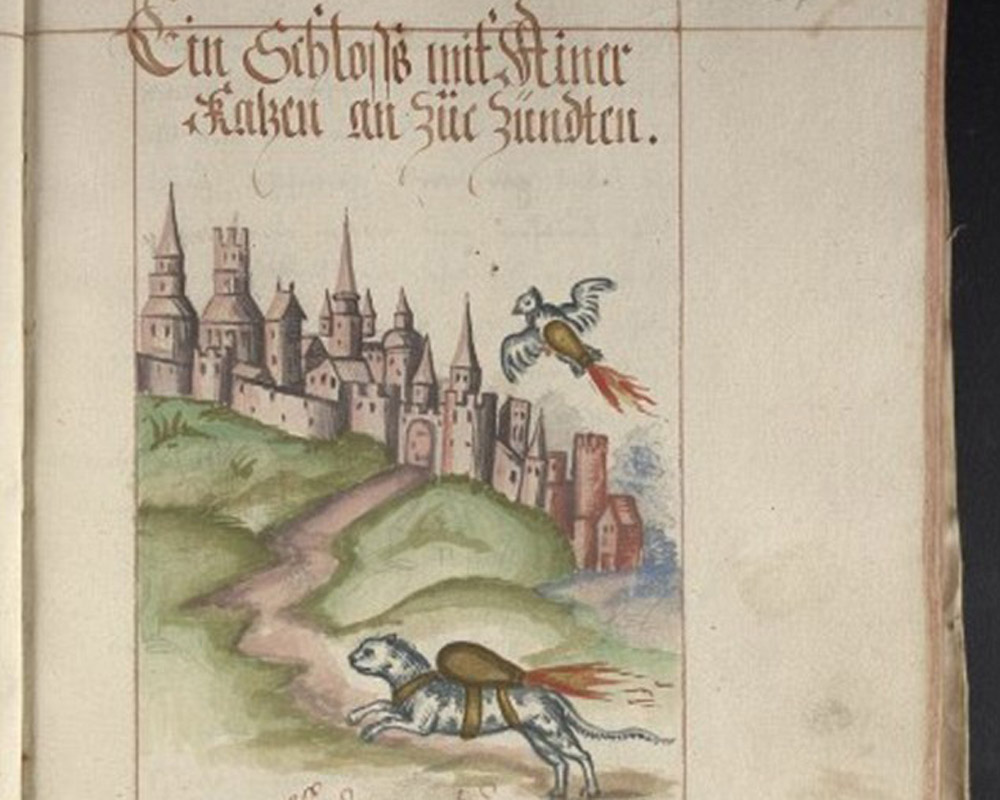 The Book of Flying Cats

Cats, birds and other animals, each one stripped with something that looks like a rocket are shown moving towards a castle. Surrealistic? Possibly. Still, this is what it is actually depicted in an illustrated 16th century manuscript recently digitized by the University of Pennsylvania.

The manuscript was produced in 1530 as an artillery manual. Its author, artillery master Franz Helm of Cologne,  was believed to have fought in several skirmishes against the Turks in south-central Europe at a time when gunpowder was changing warfare. Its text in German is accompanied by a large number of illustrations, made possibly by multiple artists. It is this group of images that draw modern attention, as among bombs packed with shrapnel and missile-like explosive devices studded with spikes, a number of weaponised cats and birds are shown, reminding the modern eye of the jet-pack known from video game characters.  According to the author, warriors could use this trick to “set fire to a castle or city which you can’t get at otherwise”.

“Create a small sack like a fire-arrow. If you would like to get at a town or castle, seek to obtain a cat from that place… and bind the sack to the back of the cat, ignite it, let it glow well and thereafter let the cat go, so it runs to the nearest castle or town, and out of fear it thinks to hide itself where it ends up in barn hay or straw it will be ignited.”, he writes.

The full-colour illustrations of incendiary-bearing cats and birds recently caught the attention of an Australian book blog and then found their way to Penn researcher Mitch Fraas, who set out to unravel the mystery.

“I really didn’t know what to make of it. It clearly looks like there’s some sort of jet of fire coming out of a device strapped to these animals.”, said Fraas, a historian and digital humanities expert at the Penn library, also stating that, to his knowledge, there is no comparative evidence that would suggest the tactics Helm describes were actually in use.

Still, whereas the historic truth behind Helm’s tactics is something for future researchers to look at, his book’s images are really “ahead of their time”, demonstrating a genious paralleled with the one of modern cartoonists, graphic noveland video game designers.