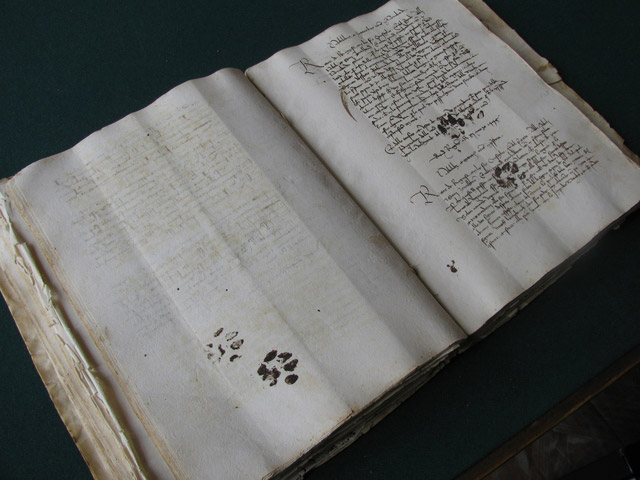 While pawing through a stack of medieval manuscripts from Dubrovnik, Croatia, University of Sarajevo doctoral student Emir O. Filipović stumbled upon a familiar set of splotches marring the centuries-old pages. Years ago, a mischievous kitty had left her ink-covered prints on the book. Filipović explains the finding:

“My story line follows a simple path: I was doing some research in the Dubrovnik State Archives for my Ph.D, I came across some pages which were stained with cat paw prints, I took a few photos of this (as I do whenever I notice something interesting or unusual on any old book I’m reading), and carried on with my work not paying too much attention to something which at that time could essentially be only a distraction”.

Thanks to a frenzy of Twitter and blog coverage, a French historian picked up on the photo and decided to include it in her Interactive Album of Medieval Paleography so that other historians can utilize the unique finding, which gives insight into daily life in 14th century Dubrovnik. Filipović elaborates:

“The photo of the cat paw prints represents one such situation which forces the historian to take his eyes from the text for a moment, to pause and to recreate in his mind the incident when a cat, presumably owned by the scribe, pounced first on the ink container and then on the book, branding it for the ensuing centuries. You can almost picture the writer shooing the cat in a panicky fashion while trying to remove it from his desk. Despite his best efforts the damage was already complete and there was nothing else he could have done but turn a new leaf and continue his job. In that way this little episode was ‘archived’ in history”.

Filipović hopes the finding may move beyond a simple cat meme and inspire more interest in the medieval Mediterranean.