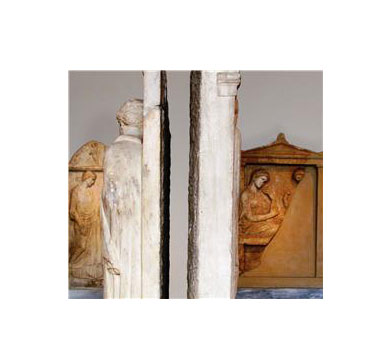 Dr. Dimitris Plantzos, Assistant Professor of Classical Archaeology at the National and Kapodistrian University of Athens will give a lecture titled “Hellas mon amour: Greek Museums and National ‘Sites of Trauma'”. The lecture will take place on Thursday, March 13 at 19:00 at the premises of the Italian Archaeological School at Athens (aula “Doro Levi) at Parthenonos 14, Koukaki.

If “the past is a foreign country”, then Greece’s classical past could be described – and it has been – as an ideal, as well as idyllic land, colonized by the West. This paper employs post-colonial theory combined with discussions of trauma as a historical agent in order to investigate ways in which contemporary Greek museums strive to attract the colonial gaze by re-claiming ownership of the nation’s (neo)classical past; at the same time, however, this exercise may be seen as an effort to alleviate the pains of modernity as experienced by a people who has never overcome the trauma of its separation from its famed antiquity. As a result, Greek archaeological spaces – both museums and sites – can be described as “sites of trauma”, as the place-scapes where the unlived experiences of an imagined past become revived.

Dimitris Plantzos is a classical archaeologist, educated at Athens and Lincoln College, Oxford. His research focuses primarily on Greek art, archaeological theory, and modern receptions of classical antiquity. His publications include: Hellenistic Engraved Gems (Oxford, OUP 1999); the Greek-language textbook Greek Art and Archaeology (Athens, Kapon 2011); and the edited volumes A Singular Antiquity: Archaeology and Hellenic Identity in 20th-c. Greece (Athens, Benaki 2008; with D. Damaskos) and A Companion to Greek Art (Oxford, Wiley-Blackwell 2012; with T.J. Smith). This year will see the publication of his new book on archaeological theory, titled Archaeologies of the Classical: Revising the Empiricist Canon (in Greek, by Eikostos Protos Editions). Formerly a Curator at the Museum of Cycladic Art, he now teaches classical archaeology at the Department of History and Archaeology, University of Athens and is co-director of the Argos Orestikon Excavation (Kastoria, Greece).

Refreshments will be served following the lecture at the premises of the Norwegian Institute at Athens, Tsami Karatasou 5, 5th Floor.