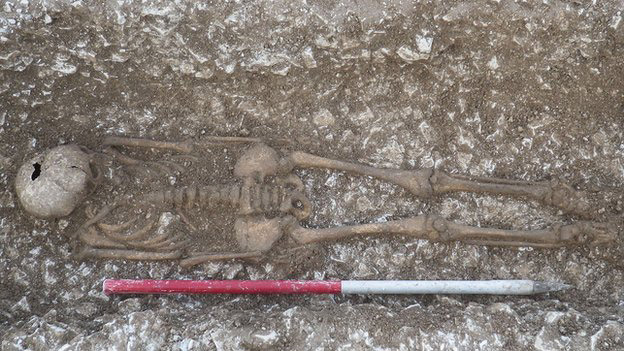 The remains of a woman who had been buried with her feet missing were found near West Knoyle, Wiltshire, UK, puzzling archaeologists who dug them during the procedures of supervising the site where new water main is to being laid.

The female skeleton was found buried lying on her back, alongside the remains of two males and a child aged 10. Her missing feet are believed to have been chopped off . Archaeologists from AC Archaeology were able to locate them: they were placed alongside her, close to her head, accompanied by the remains of at least two sheep or goats.

But what was the reason the woman was ambutated and buried in such way? Experts are still puzzled, although they preliminary state that her burial style would probably reflect certain beliefs at the time. “We’re unsure why the female skeleton has been found without her feet or why she may have been buried with sheep, but perhaps it was to protect her soul from bad spirits.”, Cox explains.

To find out more on the lady the archaeologists have sent the body off for further examination, including radiocarbon dating to determine her age. Both males found buried close to her have been already shown to have had suffered sword wounds to their hips.