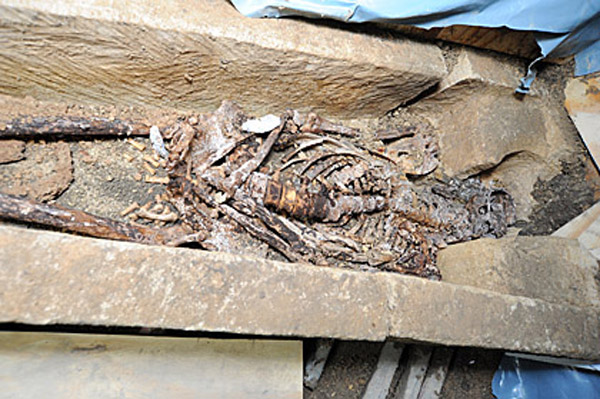 The deceased was still wearing his shoes

A skeleton found on a church beneath Lincoln Castle dating back at least 1,000 years, should reveal much about the Saxon city ahead of radiocarbon dating on its hidden coffin, archaeologists say.

The bones of an individual still wearing shoes and initially wrapped in a finely-woven textile, have been found buried within a wall beneath the castle – which was built by William the Conqueror more than 900 years ago-, in a discovery pointing to the remains of a church dating to “at least” 1,000 years ago. Archaeologists believe the remains of several skeletons found during the dig at the castle date to a stone church created between the departure of the Romans and the arrival of the conquering Normans.

At least one of the remnants, found in a tiny space three metres below ground level, is a stone coffin, with the bones found in a niche embedded in the foundations of an early stone wall on the opposite side of the site.

“Our knowledge of the site between the end of Roman period and when the castle was built is very scant,” admits Beryl Lott, the historic environment manager for Lincolnshire County Council, calling the excavation “very exciting”. “While the discovery was totally unexpected, it is well known that other Roman walled towns often contained some form of high-status use during the Anglo-Saxon period. This will greatly increase our knowledge not just of the castle, but of uphill Lincoln as well. It’s a major find and we look forward to future developments.”

Tiny impressions of the cloth used to envelope the body were visible on the mortar of the wall, suggesting a “votive deposit” of the sort usually associated with holy dedications of buildings. Archaeologists took a day to fully unearth the late Saxon sarcophagus the body rested in.

“The first step was to take a 3D scan of the coffin itself,” says Mary Powell, the programme manager for the Heritage Lottery Fund-backed Lincoln Castle Revealed project, which will eventually lead to a major public exhibition. “Then we carefully opened it up to see what was inside. The body appeared to be wearing leather boots or shoes, which was usual for this period. This would suggest that it was someone of importance. Finding a sarcophagus from this period that’s still undisturbed is extremely rare, so this discovery is of national significance. The next step will be to thoroughly analyse both the sarcophagus and the remains to learn as much as we can from it. This will undoubtedly increase what we know about Saxon Lincoln.”

Further digging is continuing near the castle’s prison, and radiocarbon dating is expected to clarify the date of the remains. The public are being encouraged to visit the site.