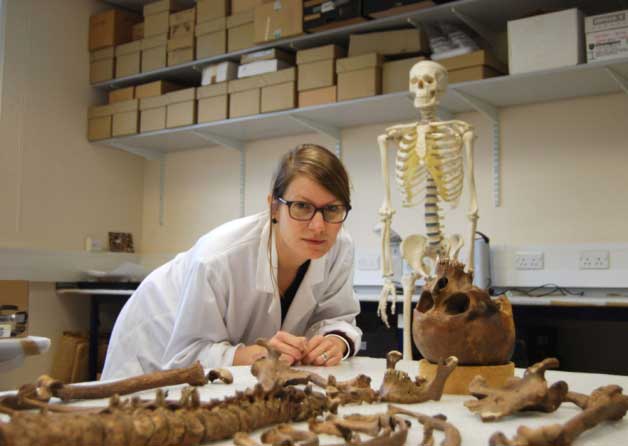 The first-ever skeletons with atherosclerosis, or clogged up arteries, have been found by archaeologists, according to new research.

After announcing the discovery of the oldest complete skeleton with metastatic cancer last month, the researchers from Durham University are now reporting five skeletons in the same group which show signs that may be related to a thickening of the arteries’ walls, known as atherosclerosis, a major risk factor for strokes and heart attacks.

The study is published in the International Journal of Palaeopathology, and forms part of a British Museum archaeological project.

Atherosclerosis and other cardiovascular diseases are the world’s leading causes of death today but they are almost unknown in past human populations. Up until now, atherosclerosis has only been reported in mummies.

The cause of atherosclerosis in the skeletons is not known. Aside from an unhealthy diet and smoking, the atherosclerosis can be caused by dental disease, infections or genetic factors.

The bioarchaeologists from Durham University say the discovery will help to shed new light on the factors leading to atherosclerosis and the evolution of the disease. The findings show that the condition is not only a product of modern living conditions but that factors leading to this chronic disease have plagued mankind for a very long time.

The skeletons are of three females and two males who were all between 35 and 50 years old when they died. They were found in underground chamber tombs at the archaeological site of Amara West in northern Sudan, situated on the Nile, 750km north of the country’s modern capital Khartoum.

The site is excavated by a team from the British Museum with the work in the cemeteries led by Durham University PhD student Michaela Binder.

In advanced atherosclerosis, the arteries become clogged up by substances called plaques, which in turn calcify leading to small, bone-like structures. These structures were found together with the skeletons which were examined using scanning electron microscopy and X-ray to analyse their origin.

Lead author, Michaela Binder, a PhD student and bioarchaeologist in the Department of Archaeology at Durham University said: “Very little is known about atherosclerosis in past human populations because it is very difficult to find evidence in skeletal human remains.

“Calcified arterial plaques in these 3,000-year-old skeletons show that atherosclerosis is not only a problem of modern lifestyle but may also be related to inflammation, genetic background and ageing in general.

“Insights gained from archaeological remains like these can really help us to understand the evolution and history of modern diseases.”

The excavated skeletons, now part of the British Museum collection, were from different graves and date between 1300 and 800BC. Graves goods associated with the individuals suggest they come from all parts of society including individuals of high and low social status. Two of the men with evidence of atherosclerosis are from the same tomb as the man suffering from metastatic cancer, as reported in PLOS ONE last month. There is currently no concrete evidence of any family ties between the individuals.

All skeletons with calcifications showed signs of severe dental disease as well as chronic respiratory diseases which are linked to vascular disease today. Genetic factors may also have played a part in predisposing this group of people to arterial disease.

Co-author, Professor Charlotte Roberts, a world-leading palaeopathologist at Durham University, said: “This find at Amara West is very rare and emphasises the special nature of this cemetery for preservation of evidence for disease. Along with the man with cancer, already reported, this contributes to knowledge about the history of cancer and heart disease, and shows how long these diseases have been plaguing the world’s population for a long time.”

The research was funded by the Leverhulme Trust and the Institute of Bioarcheaology Amara West Field School, with the permission of the National Corporation of Antiquities and Museums in Sudan. The study is part of a research project led by the British Museum which has been investigating the experience of the people who lived there and who were buried within the ancient town.