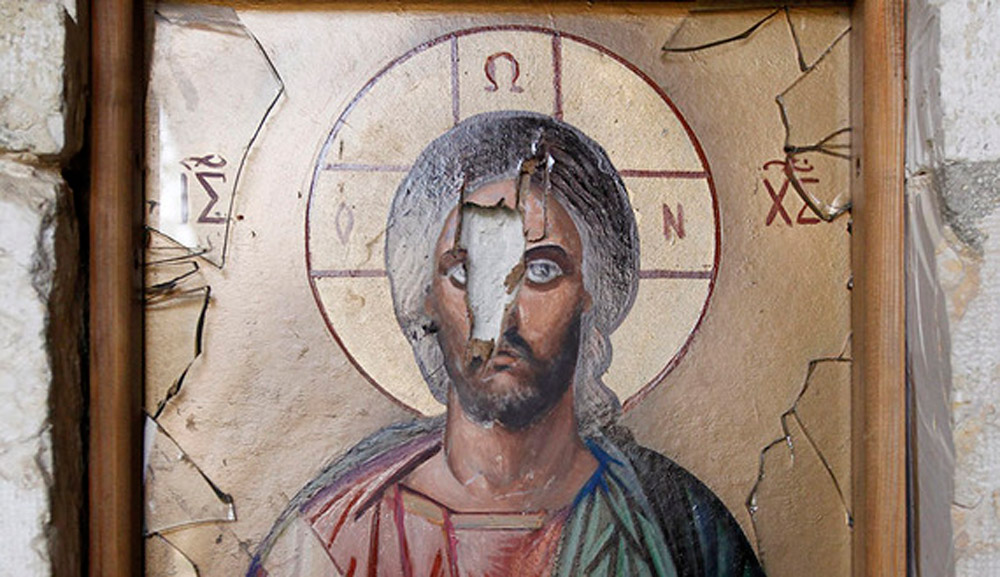 Destruction and looting at Maaloula

Extensive destruction and looting which translates to the complete loss of monuments of major importance for Christian heritage worldwide have been taken place in Maaloula, Syria, according to an official report issued by the Directorate General of Antiquities and Museums (DGAM) for the Rif Damascus governorate.

Maaloula, home to the monastery of St. Takla and famous for its Aramaic-speaking inhabitants, had fallen victim to complicit traders and fighters but also amateur fighters who looted it during the time it was controlled by the armed opposition.  The report, published in the Syria Steps website, referst to a set of destructive actions that has taken place from the city’s sack by Al-Qaeda-affiliated Jabhat al-Nusra opposition batallion at the end of last year till several weeks ago, when the Syrian army regained control.

For the damages, the report states:

“- The old town: The old town houses and alleys have been destroyed. Roofs and walls of houses built of traditional materials (stone, clay and wood) and sometimes consisting of three floors have collapsed. Also, the contents of these traditional houses have been damaged.

– Cemeteries and caves: A large number of caves and archaeological cemeteries in the town have been vandalized, sabotaged, drilled, door-smashed (in a bid to search for treasures) and turned into fortified barricades. One of the most affected caves were the ones located on the site of the Monastery of SS. Sergius (Sarkis) and Bacchus, and those near the Safir Maaloula hotel.

– Monastery of St. Takla: The primary shrine that contains the tomb of St. Takla has been completely burned, and the fate of the holy items which were there, including a large number of the most important icons, is yet to be known. Also, the main entrance to the monastery and the corridor that comes right after it have also been badly damaged and burnt. A fire was set in the Church of St. John the Baptist inside the monastery of St. Takla, after most of the items have been stolen, and the rest broken and sabotaged, such as the altar, the crosses, icons and frescos. Extremist phrases have been written on the walls of the church, and many of the wall icons have been concealed with paint.

– Monastery of SS. Sergius and Bacchus: Its construction dates back to the early fourth century A.D. Parts of the western and eastern walls of the monastery have been subject to significant damage as a result of the shells that targeted them. Also, the big dome of the building has been destroyed, targeted by shells from different directions. The crosses have been removed from the big dome and the dome of the bell. On the inside, the main marble altar has been destroyed, and its wooden cross smashed. Drilling operations were carried out under the altar in search of treasures. All of the movable antiquities and holy items inside the monastery have been stolen, including the most important Maaloula icons.

– Church of St. Leontius: The southern wall, the roof and the dome of the building have been damaged as a result of the shelling. Inside the building, the marble tabernacle has been destroyed and holy items have been stolen, including the ancient church bell which was one of the most beautiful-sounding church bells after the Church of the Resurrection bell in Jerusalem. The crosses have been removed from above the domes of the church, and some of the valuable icons have been stolen, while others were burned. Moreover, the wooden seats of the church have also been assembled in the middle and set on fire. This led to the burning of all the contents, including the false wooden ceiling of the building. The grave located inside the church has also been dug up, and the remains of priests have been thrown outside to search for treasures.

– Church of St. Barbara: The dome suffered great damage, and most of the church’s contents have been burned after the theft of valuables that included icons.

There are some modern churches and shrines in the old town, and these contain a lot of old items, all of which have been looted and destroyed, including the shrine of Mar Saba, the shrine of St. Thomas and the Church of St. Sherbin.”

The estimated financial cost of the losses has yet to be determined.