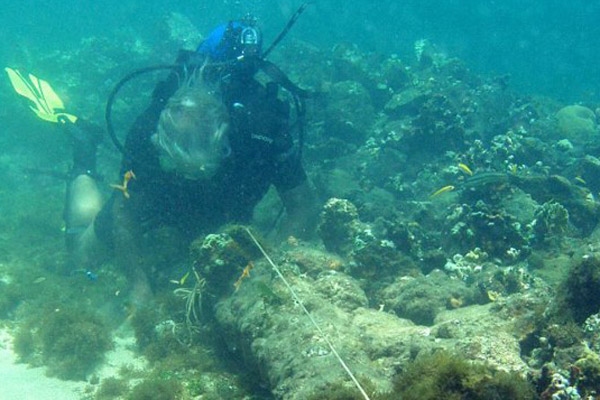 A team of underwater archaeologists led by American expert Barry Clifford has laid serious claims that they have located remains of Santa Maria, the legendary ship that carried Christopher Columbus to America in 1492.

According to a report at The Independent, team leader Clifford located the sunken vessel off the north coast of Haiti. Research itself goes back 11 years, when Clifford and his colleagues, having studied thoroughly Colombus’ personal diary, diving and using marine magnetometers and side-scan sonar equipment, found a shipwreck which they investigated. A cannon, than dated later than Colombus’ time, was found as part of that wreck. But a couple of years ago, things changed. A more thorough study of the cannon type led Clifford to reexamine the ship’s date and his theory, and, finally, to return to the spot where the wreck had been found. Just two weeks ago, Clifford’s team was back in Haiti, measuring and photographing their 2003 find.

While the cannon is now missing (the result of looting), the team still thinks the vessel still keeps a good set of info to help in its identification. According to a statement of Clifford in CNN, the ship was found in the exact area where Columbus said the Santa Maria ran aground more than 500 years ago. The wreck is indeed stuck on a reef, 10 to 15 feet beneath the water’s surface, off the northern coast of modern day Haiti,  where Columbus had set a fort. The ship also shares teh same size with Santa Maria, while stones found at the site match the kind from the part of Spain where the ship was built.

Archaeologists led by Clifford now plan to excavate after getting the appropriate permit, counting on the support of the Haitian government. As for the find’s fate after excavation, this seems more puzzling, especially if it is indeed identified with Santa Maria.

“Spain no doubt will claim its remains as a sovereign vessel,” says British marine archaeologist Dr Sean Kingsley. “Haiti signed the UNESCO Convention on the Protection of the Underwater Cultural Heritage in 2009. No doubt many heritage experts would prefer to see the wreck left underwater and turned into a dive trail as UNESCO prefers.”