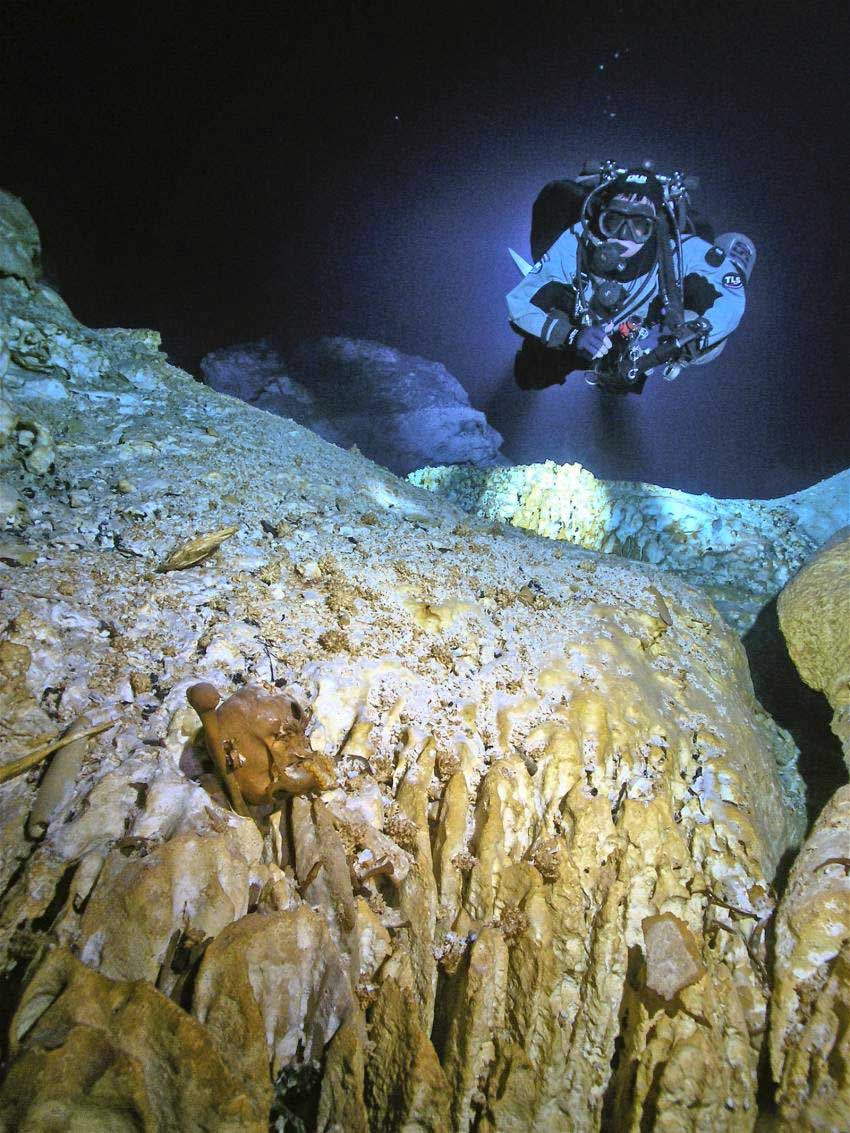 The skeletal remains of a teenage female from the late Pleistocene found in an underwater cave in Mexico have major implications for our understanding of the origins of the Palaeoamericans and their relationship to modern Native Americans.

In a paper released last week in the journal Science, a team of researchers and cave divers present the results of an expedition more than 40 meters below sea level in Hoyo Negro, a deep pit within the Sac Actun cave system on Mexico’s Yucatan Peninsula. The findings include a near-complete early American human skeleton with an intact cranium and preserved DNA. This is the first time a skeleton could be matched with an early American skull and facial characteristics with DNA linked to the hunter-gatherers who moved onto the Bering Land Bridge from northeast Asia (Beringia) between 26,000 and 18,000 years ago, spreading southward into North America sometime after 17,000 years ago. It is also one of the oldest skeletons discovered in the New World and the most complete skeleton older than 12,000 years.

As Michael Balter explains in the summary of the paper:  “Most researchers agree that the earliest Americans came over from Asia via the Bering Strait between Siberia and Alaska, beginning at least 15,000 years ago. But many have long puzzled over findings that some of the earliest known skeletons—with long skulls and prominent foreheads—do not resemble today’s Native Americans, who tend to have rounder skulls and flatter faces. Some have even suggested that at least two migrations into the Americas were involved, one earlier and one later. But the discovery of a nearly 13,000-year-old teenage girl in an underwater cave in Mexico’s Yucatán Peninsula argues against that hypothesis. The girl had the skull features of older skeletons, but the genetic profile of some of today’s Native Americans—suggesting that the anatomical differences were the result of evolutionary changes after the first Americans left Asia, rather than evidence of separate ancestry.”

As written in the abstract of the paper: “Because of differences in craniofacial morphology and dentition between the earliest American skeletons and modern Native Americans, separate origins have been postulated for them, despite genetic evidence to the contrary. We describe a near-complete human skeleton with an intact cranium and preserved DNA found with extinct fauna in a submerged cave on Mexico’s Yucatan Peninsula. This skeleton dates to between 13,000 and 12,000 calendar years ago and has Paleoamerican craniofacial characteristics and a Beringian-derived mitochondrial DNA (mtDNA) haplogroup (D1). Thus, the differences between Paleoamericans and Native Americans probably resulted from in situ evolution rather than separate ancestry.”