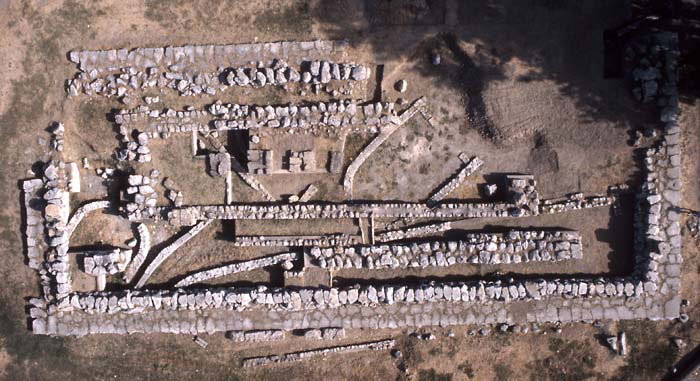 The raise of an empire on the move

Historical-archaeological overviews alongside new finds’ evaluation, contradictions and fruitful scientific correspondence, new theories alongside earlier views… The first session of the recent Colloquium to celebrate the 50th Anniversary of the Eretria Excavations by the Swiss School of Archaeology in Greece (ESAG) had everything.

The session was dedicated to the early days and develompent of Eretria, the coastal city developed along the East of Euboea (just opposite to Attica’s Scala Oropos), which went on to become, alongside its neighbour and rival Chalkis, a major player in the Greek colonization movement of the 8th and 7th century BC. While the beginning of settling Eretria remains a mystery, current researchers (members of the Swiss school and other experts) keep showing through their work that its rapid development is easily explained due to its strategic position but also the attitude of its inhabitants during colonization.

Chairing the session, Classical Archaeology Prof. Nota Kourou,  of the University of Athens, an expert in Iron Age Greece and Euboea in particular, enabled the participants, especially the ones not familiar with the site, to understand Ancient Eretria’s plan and problematics. Following Kourou’s introduction, Eretria excavator and expert Samuel Verdan (ESAG & University of Lausanne) talked about Eretria’s initial settlement. Stating that the 8th century BC was crucial for the settlement at Eretria, Verdan connected the movement -putting it in the 9th century BC- with the decline of neighbouring sites, like Lefkandi and Amarynthos, which were blooming during the beginning of the Iron Age. After an excavation overview, he moved on to present the problematics surrounding the beginning of Eretria’s chief cult, this of Apollo Daphnephorus, as demonstrated by the remains of a number of edifices surrounding the god’s first monumental temple, the so-called “hekatompedon”.

While Verdan is opposite to the general view that the Geomatric period’s edifices (among them one designated as Ed.1 which is views as the first Daphnephorion) represented different “oikoi” dedicated to the deity’s early cult, the scholar he introduced, Prof. Alexander Mazarakis Ainian (University of Thessaly), went on to support just that! Annuling Verdan’s estimations, Prof. Mazarakis-Ainian showed that geometric edifices could reflect the elite’s contribution to Apollo’s early cult.  As he showed, the Daphnephorion ( Ed.1) and “Hekatompedon” (Ed.2)  might have co-existed for some time, while evidence (in the form of graffiti) that access to the sacred space was not restricted is inconclusive. On the contrary, he highlighting that the use of the Hecatompedon was not restricted to cult as there is evidence on multiple uses (eg. metalworking activity, commercial activity) which shares parallels with such areas at Oropos (in Attica)  and Pithicoussai (in Sicily). Referring to a vacuum/decline in Eretria and also Oropos, connected to depopulation, Prof. Mazarakis-Ainian went on to speak for what Eretria is famous for: colonization!

This was a good introduction for the session’s next phase, where Sandrine Huber (ESAG and University of Lorraine, Nancy), speaking in French, introduced key terms surrounding a movement seen as one of Greek culture’s most crucial phases. Speaking on Eretria’s key geographic-cultural position within the “Thessalian-Euboean arch”, she spoke on objects of foreign origin (designating them Oriental), and found within cult sites, such as Egyptian or Egyptianizing scarabs and statuettes or other objects with hieroglyphic or quasi hieroglyphic inscriptions, objects with semitic inscriptions, oriental seals and others. She also spoke on pottery: Euboean and its imitations, showing Eretrian and, generally, Euboean cultural impact.

What was gradually demonstrated was that colonization brought about the need for Eretrians to designate themselves in two diverse terms: Eretrian or Euboean. Naming was proved crucial for trade but also the attitude followed by colonies regarding their links with Eretria as a “mother-city”. This is what the following speaker, Tel Aviv University’s Prof. Irad Malkin demonstrated. An authority in Greek colonialism studies and also a gifted speaker, Malkin applied theories of “connectivity” and networking met in other disciplines in order to explain in what ways Eretrian settlers’ identities were designated and how they changed across time. Through his speech he actually showed what is possibly Eretrians and Euboeans’ in general most major contribution to human culture: networking methods through adopting different profiles according to cases but never lose yourself.