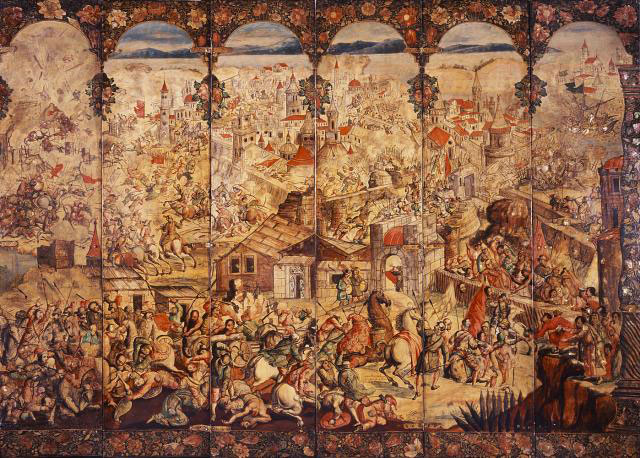 A transcultural work of art

Unfolding the untold stories of an objet d'art

Art historian Dr Meredith Hale reveals that a 17th-century screen, commissioned by the Viceroy of Mexico for a palace designed to impress visitors with the immutability of Spanish rule, is a striking example of a transcultural work of art. In an article for the Burlington Magazine, she traces the many influences that went into its narrative imagery and luxurious embellishment.

Dr Meredith Hale reveals how this unique piece of interior design embodies the merging of cultures separated by thousands of miles. She considers how the artists who created the screen took their inspiration from a wide range of traditions and genres – including, most notably, the work of Dutch printmakers – showing just how fluid was the exchange of ideas and objects during a time when the world was rapidly opening up and its elites desiring of novelties and luxuries.

The screen, which early in its history was divided in half, depicts two of the most important European victories in the Great Turkish War (1683–1699). The section of the screen now in the Museo Nacional del Virreinato, Tepotzotlán, shows the siege of Vienna on 12 September 1683, when the forces of the Holy Roman Empire, the Polish-Lithuanian Commonwealth, Saxony, Bavaria, and Franconia relieved the city from a two-month siege by over 100,000 Turkish troops. The section of the screen now in the Brooklyn Museum, New York, tells the story of the siege of Belgrade on 6 September 1688, when Imperial Habsburg troops under the leadership of the Elector of Bavaria, Maximilian II Emanuel, took Belgrade, which had been part of the Ottoman Empire since 1521.

On the side of the screen designed to face the women’s sitting room are elegant hunting scenes based on a range of European prints. The scenes on the Tepotzotlán half of the screen are based on prints after Gobelins tapestries by Louis XIV’s court artists, Adam Frans van der Meulen (1632–1690) and Charles Le Brun (1619–1690). The hunt on the Brooklyn half of the screen is based on the Medici court artist Johannes Stradanus’s designs for tapestries for Cosimo I’s villa at Poggio a Caiano. The rich floral border and garlands tied with red ribbons along the tops of the hunt scenes recall the kinds of decorative elements that would have appeared in the tapestries to which the prints were related. Both the main scenes and the decorative borders are embellished with gold paint and inlaid shell work which would have, particularly in candlelight, enlivened the busy multi-figured compositions.

“The paintings have been attributed to Juan and Miguel González, artists associated with the viceregal court,” said Hale. “The González brothers are something of a mystery. Scholars of Spanish colonial art have debated whether they are of Spanish or Japanese origin. Both are possible, given the cosmopolitan nature of Mexico City at this time and the very real influences from both traditions.”

The story of Spanish Habsburg power

When it was first made, the screen comprised 12 painted panels and, at more than seven feet high, measured 18 feet from end to end. Early in its history, this fabulous objet d’art made its way to Europe, most likely with Sarmiento de Valladares upon his return to Spain in 1701, where it was divided into two six-panel screens. The Tepotzotlán half of the screen seems to have remained in Spain until 1970, when it was taken back to Mexico and became part of the collection of the Museo Nacional del Virreinato. The half of the screen now in New York was bought by the Blois family of Cockfield Hall, Suffolk, almost certainly during the first half of the 20th century. Following a sale of some of the contents of the house in 1996, this second part is now owned by the Brooklyn Museum.

As a single objet d’art, the screen told the story of Spanish Habsburg power and, for those who viewed it, communicated a message of its inevitable continuity. Research by Hale, a specialist in Netherlandish art with a particular interest in the printmakers of the 17th century, has concentrated on the print sources for the battle scenes and the surprising ways in which newssheets produced in Amsterdam could be used in colonial Latin America. She reveals just how closely the painters drew on etchings made by the Dutch printmaker Romeyn de Hooghe during a period when printing was the primary means of producing propaganda and dispersing information.

“Prints that were designed to satisfy the European buyer’s desire for information on current events and celebration of military successes were transformed into grand decorative objects with impressive propagandistic power. What began as ‘news’ ended as an entirely new kind of object whose evocative and commemorative function was akin to that of history painting,” she said.  “De Hooghe, who is best known for Williamite propaganda, had one of the most important and prolific workshops in the 1680s in Amsterdam so while it’s surprising to see newssheets put to this particular use, his authorship of them would have made them collectible in a way that other newssheets may not have been.”

De Hooghe’s work was decidedly high-end. Prints by the same artist feature in another series of large scale painted panels that were also in the viceroy’s collection, The Battles of Alessandro Farnese. Hale’s study of this series will be published later this year.

European prints, particularly religious ones, had circulated in Latin America since the 16th century and had often been used in interesting and surprising ways, such as the pair of feather mosaics, Jesus at the Age of Twelve and The Weeping Virgin (Vienna, Kunsthistorisches Museum) made in Michoacán, Mexico, c 1600, and based on engravings of c 1590 by Philippe Thomassin after Giulio Clovio. These works already featured in the collection of Rudolf II in Prague by the early 17th century. The long-standing and lively export of European prints to Latin America was mirrored in the importation of such exotic ‘New World’ objects.

“With his commission of this painted screen, Valladares created an entirely new kind of luxury object. As shown by Rich Aste, curator of Spanish Colonial Art at the Brooklyn Museum, this is the only known work to combine the two elite Mexican genres of biombos, or folding screens, and shell inlay paintings known as enconchados. Folding screens retained their exotic status throughout the 17th century—their eastern origins were often emphasised in inventories—and the unique combination of the folding screen format, local technique of shell-inlay painting, and scenes of famous recent Habsburg victories would have served as a reminder of New Spain’s strategic location at the centre of trade from the east and the west and of the viceroy’s loyalty to the Habsburg king,” said Hale.

A fundamentally ‘transcultural’ work of art

“However, the significance of the Folding Screen with the Siege of Vienna and Belgrade and Hunting Scenes far exceeds its original context. The use of near-contemporary broadsheets produced by one of the most important Dutch printmakers of the late 17th century expands our view not only of the kinds of print sources that were used in Latin America, but also the distances that such political prints, which have often been considered to be ephemeral, travelled, the degree to which they were prized, and how, at least in one instance, such prints were used. Far from the straightforward acquisition of aspects of one culture by another, Folding Screen with the Siege of Vienna and Belgrade is a fundamentally ‘transcultural’ work of art, one that reflects the merging and converging of a range of cultures in the early modern period.”

Meredith Hale is the Speelman Fellow in Netherlandish Art at Wolfson College.