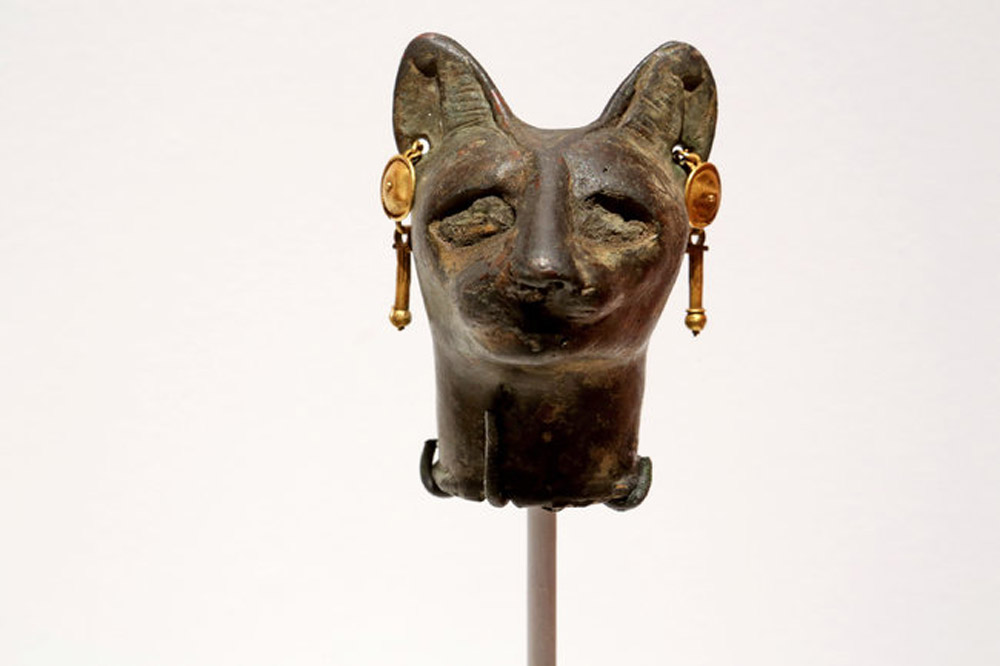 Its Reign Was Long, With Nine Lives to Start

If your dream of heaven is eternity spent with the pets you love, “Divine Felines: Cats of Ancient Egypt” at the Brooklyn Museum is your exhibition. All of its 30 objects, sifted from the museum’s Egyptian collection, are of cats, big and little, feral and tame, celestial and not. Whether cast in bronze or carved in stone, their forms were to outlast time, and so they have.

Although it’s often assumed that the domestication of cats began in Egypt, archaeology suggests that Mesopotamia was the place. And despite the feline presence in religious contexts, Egyptians didn’t worship cats per se, but created gods that had their physical features, their expressive moods and their near-supernatural intelligence.

Ancient Egyptians took the supernatural seriously. In Egyptian cosmology, the sun was supreme, a natural and spiritual force of tremendous power. At once benefactor and foe, it made crops grow, and it withered them, nurtured life and punished it. When giving this power visual form, it made sense that the Egyptians would bring cats — mercurial, multi-lived beings — into the picture.

Ancient Egyptians adored the world, but they could be remarkably unromantic about it, and they were cleareyed about the feline temperament. They had no illusions about its volatile, aggressive side, which Goddess Sakhmet personified. As a manifestation of Hathor, daughter of Re, her dutiful protection of her father could turn loose-cannon deadly. When Re, in a fit of pique at the human race, asked her to teach it a lesson, the ferocity of her response surprised even him. It was only by getting her drunk on beer dyed the color of blood that the slaughter was stopped.

In remembrance of that near-annihilation, her devotees annually staged raucous, violence-prone, drink-till-you-drop parties at her temples. And even in the most refined images of her at the Brooklyn Museum, you can sense how formidable she could be. In a Late Period bronze statuette dated from 664 to 332 B.C., she stands lithe, lion headed and straight as a blade, striding forward as if nothing could stand in her way. In a fragment of an earlier stone carving, we see just her lion face. Realistically modeled, almost life size, it seems to be bearing down on us, relentless, smothering, devouring. This is how a cat must look to a mouse.

In a constantly mutating pantheon of divinities, other Egyptian goddesses also assumed feline attributes but were more benign. So it was with Bast, or Bastet, who started out as a “cave felem” case but eventually exchanged a lion’s mane and snarl for the trim profile of a domestic shorthair and channeled her belligerence into maternal warmth. By the start of the first millennium B.C., the cults of Bast and other feline-goddesses were widespread, increasing the demand for ready-made votive sculptures for offerings. Bureaucratic texts record that priests bred cats specifically for this purpose, and radiographic examinations of mummies indicate that, at some temples, kittens were routinely killed — usually by having their necks snapped — and inserted into sculptures sold to pilgrims.

The Brooklyn exhibition, which opened on Thursday, has several wonderful small sculptures associated with her. In one, from the Ptolemaic period (332-30 B.C.), she is a tiny bronze cat-woman; in another, the human features vanish, and the cat stays, perched, as if for worship, atop a lotus-shaped column. Whether other images — of a mother cat nursing her kittens, or an adult wearing regal gold earrings — meant to represent Bast or not, the association with her is clear, as it seems to be in a two-foot-high wood carving of a cat, also of Ptolemaic date. With traces of gilding and big, hollow, once-inlaid E.T. eyes, it’s a haunting thing, and may have been made as a votive offering at a temple to Bast by a believer seeking blessings. Although this sculpture is of solid wood, others were hollowed out and used as containers for mummified cats. And while some such sculptures were memorials to beloved pets, others had less sentimental uses.

The concept of goddesses like Sakhmet and Bast are shaped by its biases, which included a view of women as unpredictable and untamable, and therefore dangerous, and, like the cat, as fundamentally divided in nature: ruthless killer; tender mother.To find a more stable and conventionally humane presence in the leonine line presented by the show, you have to look to male deities, and particularly to the dwarfish god named Bes.

Bes presided over the everyday home, chasing malign spirits away with his Cowardly Lion shushes and grimaces. He eased the perils of childbirth, supervised the raising of children and tried his hand at healing illness in an age almost devoid of what we would call medicine. Most important, he was an emergency task force, an existential 911. When you were in crisis, poised at a chasm, he was your bridge across.

And he was also fun. He danced; he sang; he played the lute. He made life a happy experience, so you wanted him around. People painted their rooms with his image, wore it around their neck, tattooed it on their skin. He was so popular that his reputation spread well beyond Egypt. In the Christianized form of St. Bessus, he reached Italy. The Balearic island of Ibiza, long a pleasure ground for international tourism, is named for him.

Like the female goddesses, he came in different versions, some more approachable than others. His nearest equivalent is a god named Tutu, who watched over sleepers and dreamers, and had the knack for redirecting human destiny, turning lives around. Tutu embodied a twist on the standard feline-headed-god model. In a limestone sculpture from around the first century A.D., he’s depicted as a sphinx, a creature with a human head on a lion’s body.

Like the other complex, composite beings that surround him, he puts a winning foot forward in the Brooklyn show, which has been impeccably installed by the museum’s associate curator of Egyptian art, Yekaterina Barbash, and will be on view for more than a year. Though confined to a single, narrow, red-painted room at a far end of the Egyptian galleries, it doesn’t feel like an annex to those galleries. It feels like a destination. After you’ve wandered through thousands of years of art in the permanent collection, with cats scattered here and there, you arrive at this feline sanctuary and, if you’re the person I think you are, you’re home.