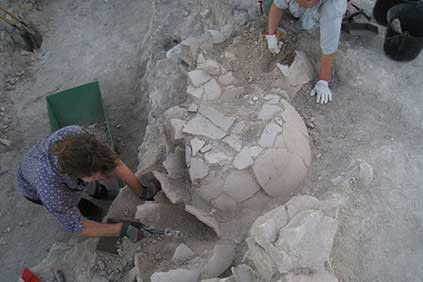 Archaeological research at Mouttes of Alampra

The second season of archaeological research at the locality Mouttes of Alampra, conducted under the direction of Dr Andrew Sneddon of Queensland University, has been completed. The research conducted during 2014 is the continuation of the work that had been conducted by the Australian mission at the same site during 2012.

The site had been identified as preserving the remains of an Early and Middle Bronze Age settlement already since the 19th century. However, the first investigation on a scientific basis at the site was conducted during the 1970s and 1980s, when an archaeological mission of Cornell University excavated there a part of the ancient settlement. In 2012 the Department of Antiquities assigned further investigation of the site to the Queensland University mission. This decision was made after the Department of Antiquities had discovered in 2005 a part of the ancient settlement which had not been identified and investigated by the Cornell mission.

In 2012, the Queensland Alampra Archaeological Mission conducted small scale excavation by trial trenches at locations defined by the Department of Antiquities. That investigation confirmed that architectural remains of the ancient settlement were preserved there. During the same exploration season, geophysical investigation by ground penetrating radar and gradiometer was carried out on a much wider area, revealing indications of the existence of architectural remains, possibly of settlement houses, as well as of tombs.

The aim of the 2014 excavation was to ‘ground truth’ the geophysical survey data, using a number of tightly defined excavation areas at points where geophysical survey had indicated that settlement and cemetery remains had survived. Nine excavation trenches were investigated, which confirmed that the interpretation of the geophysical survey data was accurate in most of cases. Remains of buildings as well as tombs were revealed. After these promising results, the Department of Antiquities awaits a comprehensive proposal by the Queensland mission concerning the aims and methodology of further research.