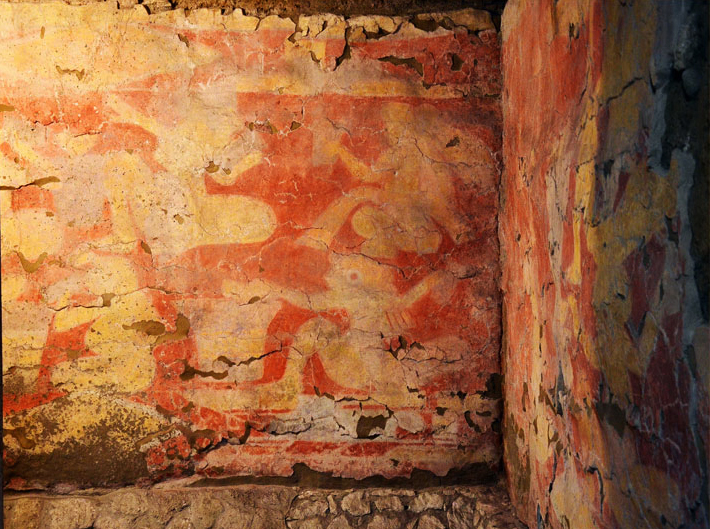 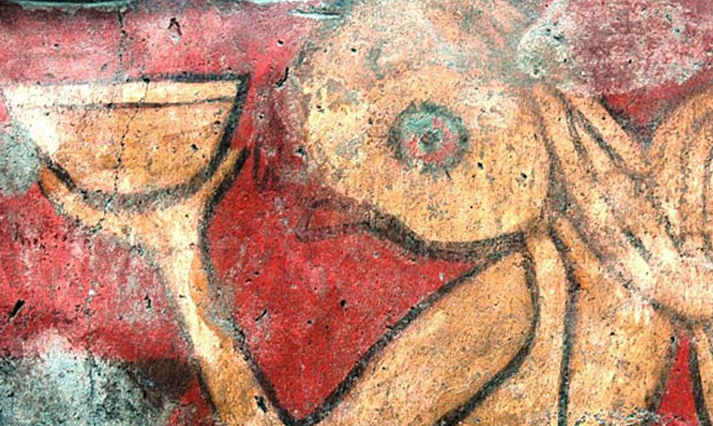 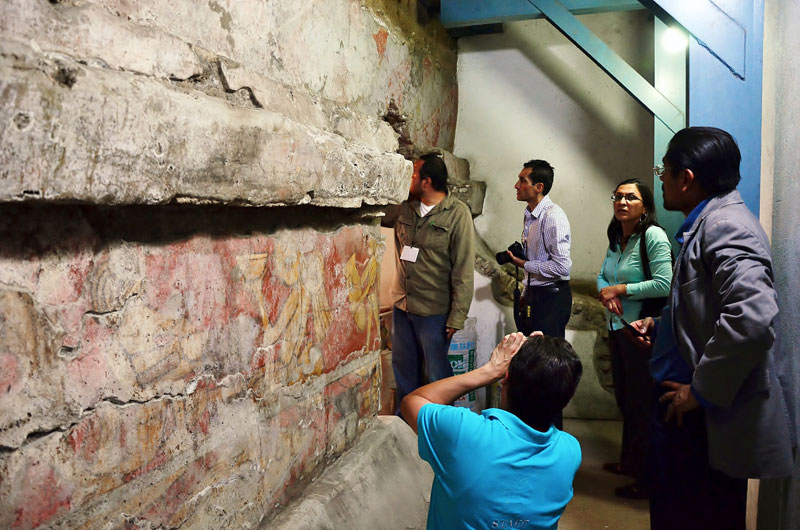 At the Great Pyramid of Cholula site

Los bebedores or The Drinkers, a large pre-Hispanic mural, was discovered in 1969. However it has remained hidden from public view. Now visitors can see the mural at the Mexican archaeological zone of Cholula near Puebla for a limited period only.

The mural has been conservated thanks to an initiative that was instituted a decade ago by the National Institute of Anthropology and History (INAH).

Discovery of the mural

The mural was discovered buried at a depth of almost 7.6 metres (25 ft) and is one of the longest pre-Columbian murals found in Mexico, with a total length of 57 metres (187 ft). The building containing the mural was discovered accidentally in 1969 by Ponciano Salazar Ortegón while he was exploring Edificio 3-1-A of the Great Pyramid of Cholula in Mexico. One of this building’s taluds collapsed and exposed a portion of the mural behind it to view. Excavation of this building then continued until 1971. The building’s main facade, which faces east towards the Courtyard of the Altars, contains the mural.

Ritual of the pulque gods

The subject of the mural is a feast, featuring personages drinking what is most likely pulque, an alcoholic beverage traditional to central Mexico, made from the fermented sap of the maguey (agave) plant. The 164 various characters drawn with great dexterity are dressed in loincloths, sitting or squatting, with some even defecating, and some wearing zoomorphic masks. The figures sit in facing pairs, serving themselves from vessels placed between them. The subject of the mural is a ceremony where the participants appear relaxed as they realize various activities, which include drinking, making offerings, serving with one vomiting and one defecating. The figures are in vignettes along the strip of wall with the elements evenly distributed along its length. A number of the elements, such as the cups and jars, are associated with the drinking of pulque. It has been claimed by Florencia Muller that this mural is the oldest known representation of the ritual of the pulque gods.

All these characters “are in a state of intoxication”, says Enrique Lozoya, one of the team members of the National Coordination of Conservation of Cultural Heritage (photography) of the INAH, who currently works on-site. Lozoya has made scale drawings of each of the revellers.

Controlled visits are conducted during seasons in which restorers work on the site, so at the moment those interested have the opportunity to see them until the first week of July 2014.