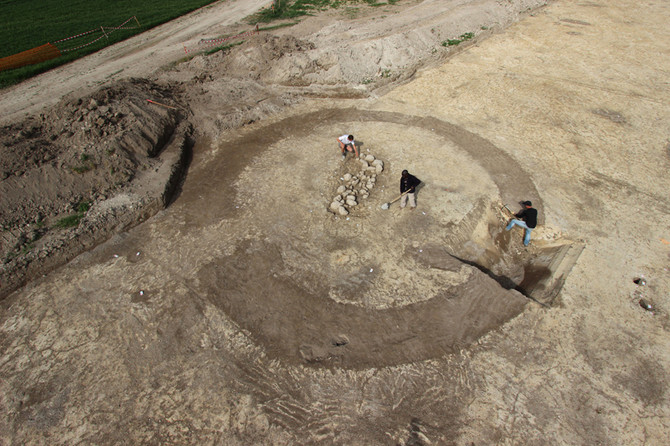 Burial monuments and tombs dating from the end of the Middle Bronze Age to the beginning of the Late Bronze Age were revealed during rescue excavations conducted by Inrap archaeologists in April 2014 at the commune of Marigny-le-Châtel (north-central France) before work on a new gas pipeline goes ahead.

The necropolis contained forty burials – both inhumations and cremations. The outstanding funerary monuments of the necropolis are made up of five enclosures surrounded by ditches of various shapes and sizes. Two circular enclosures measuring 5m and 18m in diameter were found on the outer areas of the site.

Three other monuments were located in the heart of the necropolis. The first two monuments have retained their central graves (rectangular pits dug directly into the chalk, with interior structures composed of sandstone blocks). The graves had been subjected to past looting, but a few remaining fragments of bone confirmed that they had once contained burials. The first was 12m long and sub-rectangular with an entrance to the northeast. The second was circular (12m diameter) with an entrance to the south indicated by the presence of stake holes. The third ditched enclosure, although partially levelled, was rectangular (8 m wide) and contained at least two graves.

A second type of ‘monument’ had the shape of three fenced rectangular spaces, oriented north-south like the majority of the tombs of the necropolis. Closely spaced post holes delineated the enclosures, the largest of which was 7.50m by 3.75m. Their function has not yet been fully understood, however, the presence of a rectangular area within the interior hints at burial. It is the first time archaeologists find this type of structure in a Bronze Age funerary context.

Thirty burials and cremations were dotted amongst the main funerary monuments. Nearly half of these graves were lined with sandstone blocks, creating burial cists, while other simpler graves were in the shape of small circular pits. Fragments of burnt bone was either scattered into the ditch fills or placed within ceramic urns or perishable containers like a bag or a basket.

Also a rich variety of grave goods were found, such as pins, belt fastenings, bronze daggers, flint blades and a typical assemblage of ceramics from the beginning of the Late Bronze Age.

The necropolis is regionally important as it reflects the wide variety of funerary practices being carried out at this period, and highlighted through the treatment of the body, the funeral deposit and the tomb architecture. This excavation has produced valuable information to aid the research programmes already under-way on the valleys of the Yonne and the Seine.