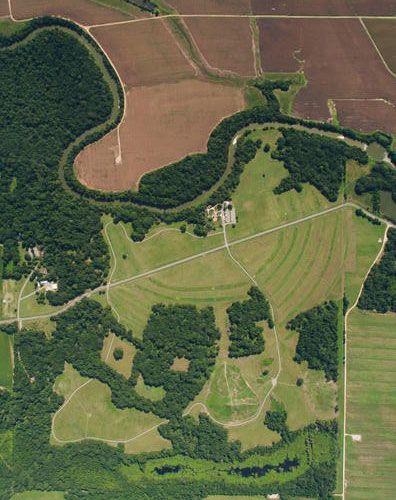 A remarkable achievement in earthen construction

The monumental earthworks at Poverty Point are one of seven sites from around the world that have been added to the list of UNESCO World Heritage sites.

Monumental earthworks of Poverty Point owes its name to a 19th century plantation close to the site. It is located in the Lower Mississippi Valley on a slightly elevated and narrow landform.

Between 1700 BCE and 1100 BCE, an integrated architectural complex consisting of three or four earthen mounds, a series of six vast concentric semi-elliptical earthen ridges (ranging in diameter from 600 to 1200 meters), a large flat plaza defined by the innermost ridge (14 hectares or 35 acres in size), and several borrow areas, was constructed at this site on a bayou (a marshy tributary) not far from the west bank of the Mississippi River.

The ridges are believed to have served as living areas.  Three mounds, one of which is the second largest earthen structure in North America, are outside the ridged enclosure; two are inside it.

The vast earthen architecture of this site was constructed by a foraging society of hunter- gatherers, not a settled agricultural people, which makes it all the more remarkable a site. It is still not understood how and why such a society could so totally transform this landscape.  It may well be the largest hunter-gatherer settlement that has ever existed.  Not only was it the largest settlement of its time in North America, but its design was absolutely unique and its construction required an unprecedented amount (over 750,000 cubic meters) of earth-moving. Poverty Point was also the center of a major exchange network with goods brought in from as far as 1,600 kilometers (1,000 miles) distant.