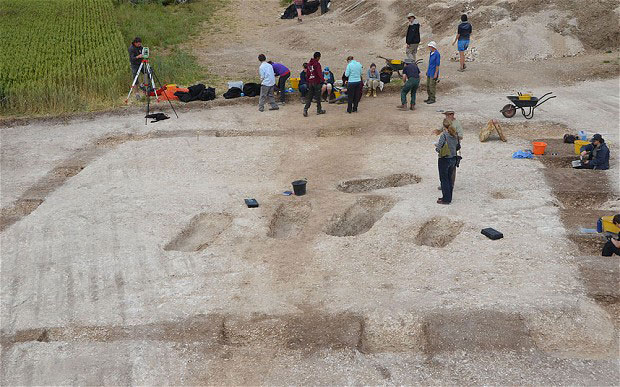 Skeletal remains found at a late-Roman villa in England

The skeletal remains found at a late-Roman villa in England could help to shed light on the rural elite of late-Roman Britain. The find was uncovered at the Durotriges site in Dorset.

The skeletal remains are thought to be unique as they are buried near a Roman villa, making it likely that the skeletons belonged to the owners and occupants of the villa – the first time in Britain that the graves of villa owners have been found in such close proximity to the villa itself.

Three generations of the same family

Five skeletons were found; two adult males, two adult females and an elderly female – with researchers postulating that they could be the remains of three generations of the same family, who all owned the villa. The bones are thought to date from the mid-4th Century (around 350 AD).

Miles Russell, a Senior Lecturer in Archaeology at Bournemouth University and one of the archaeologists leading the dig, said, “The discovery is of great significance as it is the only time where evidence of a villa and the villa’s occupants have been found in the same location in Britain. This could provide us with significant information, never retrieved before, about the state of health of the villa owners, their ancestry and where they came from.”

Miles continued, “One of the big questions in South West is whether the villas in the South West were owned by Britons who have become Roman or owned by people from another part of the Empire who have come to exploit an under-developed rural area. All villas in this region in the South West are late-Roman – and our findings should tell us more about what life was like in this period of history. This is what what can be assessed when the bones are analysed.”

The discovery was made by staff and students from Bournemouth University, who are working on the Durotriges Big Dig project in North Dorset.

The villa itself was excavated last year by students working on the project, and the latest find is the final step in excavating this particular area of rich archaeological significance.

Paul Cheetham, Senior Lecturer in Archaeological Sciences and co-director of the project, added, “We are looking at the rural elite of late-Roman Britain, living through the economic collapse that took place during this period. These remains will shed light on the final stages of the golden age of Roman Britain.”