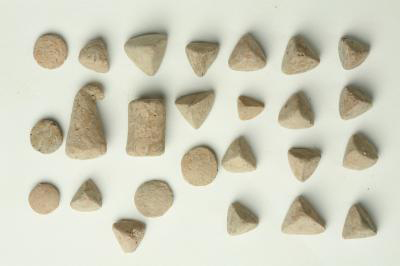 Prehistoric ‘bookkeeping’ continued long after invention of writing according to the results of an archaeological dig in southeast Turkey. Archaeologists have uncovered a large number of clay tokens that were used as records of trade until the advent of writing, or so it had been believed.

But the new find of tokens dates from a time when writing was commonplace – thousands of years after it was previously assumed this technology had become obsolete. Researchers compare it to the continued use of pens in the age of the word processor.

The tokens – small clay pieces in a range of simple shapes – are thought to have been used as a rudimentary bookkeeping system in prehistoric times.

One theory is that different types of tokens represented units of various commodities such as livestock and grain. These would be exchanged and later sealed in more clay as a permanent record of the trade – essentially, the world’s first contract.

The birth of writing

The system was used in the period leading up to around 3000 BC, at which point clay tablets filled with pictorial symbols drawn using triangular-tipped reeds begin to emerge: the birth of writing, and consequently history.

From this point on in the archaeological record, the tokens dwindle and then disappear, leading to the assumption that writing quickly supplanted the token system.

However, recent excavations at Ziyaret Tepe – the site of the ancient city Tušhan, a provincial capital of the Neo-Assyrian Empire – have unearthed a large quantity of tokens dating to the first millennium BC: two thousand years after ‘cuneiform’ – the earliest form of writing – emerged on clay tablets.

“Complex writing didn’t stop the use of the abacus, just as the digital age hasn’t wiped out pencils and pens,” said Dr John MacGinnis from Cambridge’s MacDonald Institute for Archaeological Research, who led the research.

“In fact, in a literate society there are multiple channels of recording information that can be complementary to each other. In this case both prehistoric clay tokens and cuneiform writing used together.”

The tokens were discovered in the main administrative building in Tušhan’s lower town, along with many cuneiform clay tablets as well as weights and clay sealings. Over 300 tokens were found in two rooms near the back of the building that MacGinnis describes as having the character of a ‘delivery area’, perhaps an ancient loading bay.

“We think one of two things happened here. You either have information about livestock coming through here, or flocks of animals themselves. Each farmer or herder would have a bag with tokens to represent their flock,” said MacGinnis.

“The information is travelling through these rooms in token form, and ending up inscribed onto cuneiform tablets further down the line.”

Archaeologists say that, while cuneiform writing was a more advanced accounting technology, by combining it with the flexibility of the tokens the ancient Assyrians created a record-keeping system of greater sophistication.

“The tokens provided a system of moveable numbers that allowed for stock to be moved and accounts to be modified and updated without committing to writing; a system that doesn’t require everyone involved to be literate.”

MacGinnis believes that the new evidence points to prehistoric tokens used in conjunction with cuneiform as an empire-wide ‘admin’ system stretching right across what is now Turkey, Syria and Iraq. In its day, roughly 900 to 600 BC, the Assyrian empire was the largest the world had ever seen.

Types of tokens ranged from basic spheres, discs and triangles to tokens that resemble oxhide and bull heads.

While the majority of the cuneiform tablets found with the tokens deal with grain trades, it’s not yet known what the various tokens represent. The team say that some tokens likely stand for grain, as well as different types of livestock (such as goats and cattle), but – as they were in use at the height of the empire – tokens could have been used to represent commodities such as oil, wool and wine.

“One of my dreams is that one day we’ll dig up the tablet of an accountant who was making a meticulous inventory of goods and systems, and we will be able to crack the token system’s codes,” said MacGinnis.

“The inventions of recording systems are milestones in the human journey, and any finds which contribute to the understanding of how they came about makes a basic contribution to mapping the progress of mankind,” he said.