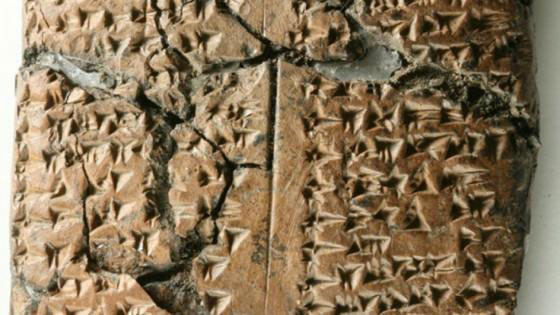 Female names in an unknown language

Where did the women come from?

A researcher from Cambridge believes to have discovered evidence for a previously unknown ancient language in a list of female names inscribed on a 2800 year old cuneiform tablet.

The tablet came to light during excavations of the Assyrian palace of the town Tushan (south-east Turkey). The tablet revealed the names of 60 women. According to archaeologist MacGinnis, however, 45 of them bear no resemblance to any of the thousands of ancient Middle Eastern names already known to scholars.

Ancient Middle Eastern names are normally composites of ordinary words in the relevant local lexicon. The unique nature of the tablet’s 45 names (e.g. Ushimanay, Alagahnia, Irsakinna and Bisoonoomay) is seen by scholars as evidence of a previously unknown language. Now archaeologists and linguistics experts are set to analyse the mystery names in even greater details to try to discover whether the letter-order or letter frequency shows any similarities to previously attested ancient tongues to which this mystery language could be related.

The 60 women (including the 45 with evidence of the previously unattested language) were almost certainly being deployed by the palace authorities for some economic purpose (potentially a female-associated craft activity like weaving). Indeed the text mentions that some of them were being allocated to specific local villages. It’s likely that the women were compulsorily moved from their homeland and assigned to work near Tushan sometime in the second half of the 8th century BC – when the area were they lived was conquered by Assyrian kings.

According to scholars, the 45 women are thought to come from somewhere in the central or northern Zagros Mountains, because that is the only area in which the Assyrians were militarily active at the relevant time where the ancient languages are still largely unknown. The discovery may help reveal the ethnic and cultural origins of some of history’s first ‘barbarians’ – mountain tribes which had, in previous millennia, preyed on the world’s first great civilizations, the cultures of early Mesopotamia.

The excavation of the palace at Tushan is being carried out by a German archaeological team directed by Dr. Dirk Wicke of Mainz University as part of an archaeological investigation into the ancient Assyrian city led by Professor Timothy Matney of the University of Akron in Ohio.