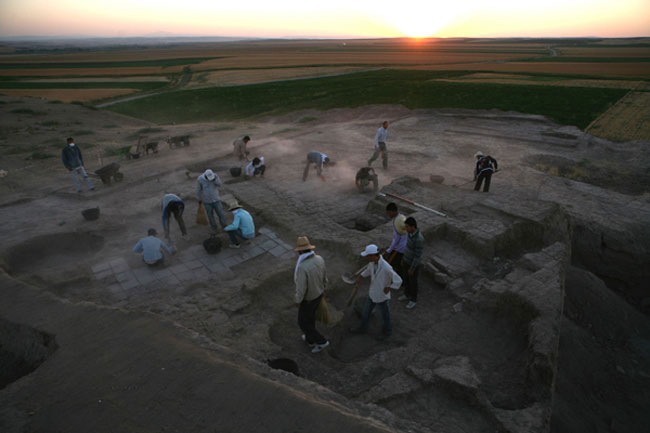 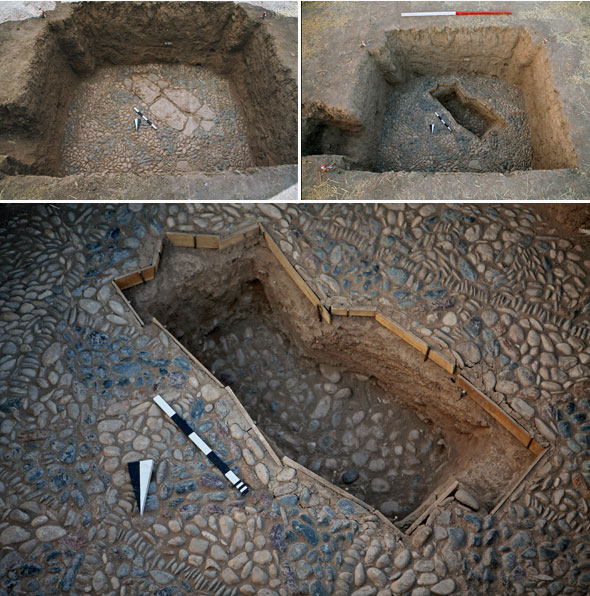 The Assyrian city of Tushhan

A race against time

The ancient mound at Ziyaret Tepe in Diyarbakir province of southeastern Turkey, comprises two distinct areas: a high citadel and an extensive lower town. Since 1997 an international team of archaeologists have been excavating a site that was occupied nearly continuously for 2400 years from the Early Bronze Age (c. 3000 BCE).

Over most of this time Ziyaret Tepe was a modest village situated on the fertile Tigris floodplain. However, Professor Timothy Matney of the University of Akron, (the project director) in collaboration with Professor McGinnis of the University of Cambridge discovered that during the Middle Iron Age (c. 882 – 610BCE) Ziyaret Tepe acted as an important urban centre situated on the northern periphery of the Assyrian Empire and was known as the city of Tushhan.

The site’s location on the Tigris river means that it is now threatened with destruction by the rising flood-waters of the Ilisu dam and the team has been working hard to save as much of this heritage before it disappears.

“One of the goals of the Ziyaret Tepe project was to map as much of the ancient city as possible” Matney explains, “in fact, I selected the site precisely because the large lower town appeared to have only a single period of occupation.”

Matney had previously worked on an Early Bronze Age city site (Titris Hoyuk) and managed to create a map using geophysical survey techniques. Following this success he wanted to further extend the survey work to look at Iron Age sites. At Ziyaret Tepe, he used a combination of two shallow subsurface geophysical technologies – electrical resistivity and magnetic field gradiometry – to map the major architectural elements of the lower town.

Magnetic gradiometry has been carried out over the entire lower town, while electrical resistivity which is much slower and more difficult to use provided coverage in areas where gradiometry was particularly successful.

Mud-brick walls tend to retain moisture better than the surrounding soil, so they appear as linear low-resistance features.

To overcome the problem of topsoil which has no moisture whatsoever, the team had to add water in order to overcome the issue of contact resistance. This meant each probe hole was pre-drilled, filled with water, and allowed to soak for a few minutes before the mobile resistance metre could be used. This herculean effort was required to collect good data.

The project team combined these technologies with selected large-scale excavation and a few smaller soundings. The result was a full record for the route of the fortification wall which enclosed the entire city. The wall contained small projecting towers at regular intervals and two large gateways, one of which has now been excavated.

“We recovered the location of two major public buildings: an elite residence and an administrative structure, possibly a treasury linked to the temple of Ishtar,” Matney stated, “and across the lower town, we have documented about a dozen large buildings and a street system which may have been connected with private houses. ”

Excavation of an Assyrian palace

On the citadel mound, geophysical survey was unsuccessful and they relied upon two large areas of excavation. On the eastern edge of the high mound was situated a palace containing extensive material remains from the Assyrian period including five cremation burials in the courtyard. Elsewhere, a number of rooms of a large Assyrian building were investigated, however, they were poorly preserved and of uncertain function.

The finds to date have been impressive, with the discovery of the palace, temple complex and monumental fortifications. They have also included an archive of ancient Assyrian cuneiform tablets dating to the very end of the Assyrian empire – between the sack of Nineveh in 612 BC and the final collapse of the empire. One special text elicited worldwide interest as it suggested the existence of a language previously unknown.

Other finds from 2012 include a burial under the earlier of two floors of a large building. The individual found here has been tentatively identified as a tallish 40-50 year old male with very robust bones. Curiously, his body was extended lying face down with his grave goods placed underneath him – highly unusual for an Assyrian burial. The finds included two ceramic vessels – one in each hand – containing dozens of beads, a bronze fibula and a frit cylinder seal. He was wearing a white stone pendant and what appears to be an iron pendant or possibly a blade or tool around his neck and a bronze ornament was found near his right elbow.

The grave contained quite a few stone beads, including a banded black and white stone, as well as carnelian – perhaps decoration for his clothing. Also found loose in the grave was a stone pendant and a second cylinder seal with bronze caps.

A mosaic pavement that was first discovered in 2004 provided another surprise during the 2012 season. An unusual feature of flat stones inserted into the mosaic of black and white pebbles was seen as another potential grave, given that Assyrian burials are often found beneath the floors of buildings. The stones were carefully lifted and the excavation continued down until the archaeologists found not a grave but another mosaic floor surface – representing an earlier phase of the Late Assyrian building.

The image shows the lower pavement beneath the cobbled surface. So, while there was no grave, the team learned that this part of the building did have a substantial earlier occupational phase. This important discovery has led them to open up a further area of the same building to see if more evidence of the earlier phase can be found.

The Assyrians founded three major settlements on the Tigris in order to protect their northern frontier and to aid in the transshipment of materials from the Taurus region and elsewhere in the empire.

Although the region provided an important source of timber, stone, copper and tin ore, the geography of the Taurus mountains is such that the Assyrian army was unable to control the region militarily for any length of time.

Out of the three Assyrian cities that are known only two have been investigated to date – Tushhan (Ziyaret Tepe) and Tidu (Uctepe). The third one, Sinabu (Pornak), still remains untouched and Uctepe although excavated by a Turkish team a few decades ago, produced no city plan as only the citadel was investigated.

In addition to the major urban centres, the area south of the Tigris river (which runs east-west at this location) had numerous small settlements, several of which have now been excavated such as Kavusan Tepe and Hakeme Use. These smaller settlements were agricultural production areas which clearly fed into the network of places shipping supplies to Ziyaret Tepe and the other large urban centres.

In terms of administration, there is considerable documentation in the form of a cuneiform archive which records the dispersements and collecting of grain. Ziyaret Tepe is located in prime agricultural land and, from the archive as well as the excavations in the temple treasury it is known that the Assyrians were producing vast quantities of grain necessary for imperial activities.

Included in the many recovered artefacts are a number that were used in accounting including a one talent duck weight and clay tokens as well as the accounts themselves, carefully recorded on clay tablets.

It is written that the king came to Ziyaret Tepe on at least one occasion and there was a strong military garrison at the site. This is evidenced by the fortification walls and gates and the substantial number of artefacts such as spears, knives, arrowheads and armour.

A network of spies

The Assyrians maintained a network of spies to keep track of events occurring north of the river and occasional raids into the hills were designed to secure interests.

Texts from elsewhere tell of large populations of deportees being moved into this region to serve as labourers for the state. The recently published tablet from this site (in an unknown language), listed the names of women and may represent the administration of one of these deported populations.

Now though for Ziyaret Tepe time is running out. 2013 will be the last season on-site and Professor Matney will need to decide what are the most important areas to survey and excavate.

These decisions will be critical if the team is to collect the maximum information possible before Ziyaret Tepe finally disappears under the flood waters of the dam.