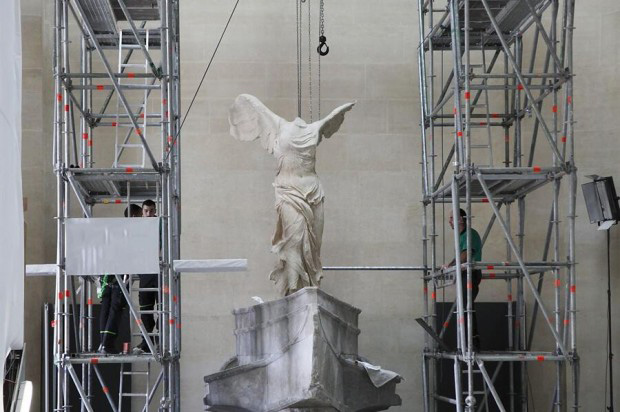 Winged Victory of Samothrace is back at the Louvre

The Winged Victory of Samothrace has been reinstalled at the Louvre after a 10-month restoration. The project has been partially crowd-funded through 6,705 micro-donations adding up to €1 million. Its total cost was €5 million. On July 12, the iconic statue has been put back in its place at the landing of the monumental Daru staircase.

The Winged Victory of Samothrace is considered a unique masterpiece of Hellenistic sculpture, created around 190BC by an unknown sculptor. The monument consists of a statue of a winged female figure –the messenger goddess Victory, Nike in Greek– and a base in the shape of the prow of a ship. The whole measures 5.57m in height. The monument is an offering made in the Sanctuary of the Great Gods on the island of Samothrace following a naval battle. It was discovered in 1863 by Charles Champoiseau, a French diplomat and has graced the halls of the French Museum since 1884.

The aim of the restoration project was to return the famous statue to the conditions in which it was found in 1863, mainly to highlight the original contrast between the pale marble statue and the darker blue-gray of its base. Although, as Ludovic Laugier from the Louvre’s department of Greek, Etruscan, and Roman antiquities told Le Figaro, the object was never to return it to its second century BCE color palette.

“Originally,” Laugier remarked, “the wings were also a hue of blue.”

Following the return of Nike on its pedestal in the Louvre Museum, the French museum’s official Facebook page has been flooded by hundreds of messages praising the beauty and demanding the repatriation of the statue. It should be noted that the Winged Victory has the lion’s share of the Louvre’s seven million annual visitors.