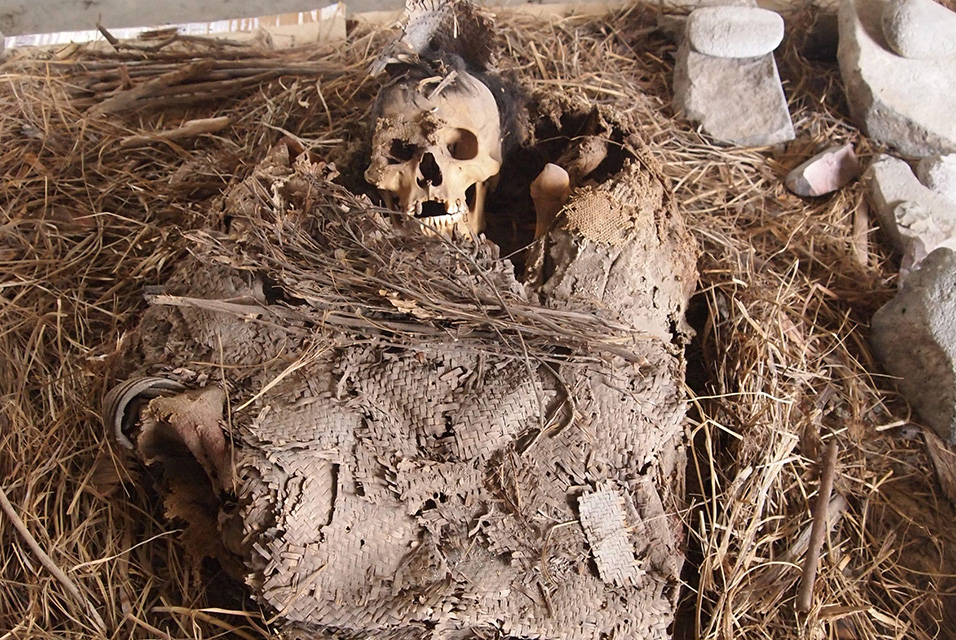 A Pre-Hispanic mortuary bundle was found in a rocky shelter of the oriental part of Sierra Gorda, in the municipality of Zimapan, Hidalgo, that contains the osseous remains of an adult approximately 20 years of age at death. The finding is considered unique in the entity’s archaeology, since there aren’t any similar cases registered.

According to archaeologists Juan Manuel Toxtle Farfan and Ariana Aguilar Romero, from the National Institute of Anthropology and History (INAH), the inhabitants of the municipality notified INAH about the finding. INAH experts traveled to the site and could state that given it’s characteristics it might to the pre-Hispanic period. Toxtle Farfan added that the finding is not a mummy, because it would still conserve bland tissue, as skin, muscles and tendons. The only thing left are bones, but in an excellent state of conservation. “The skeleton seems to be complete, but we will not know this with certainty until we can open the shroud, but at first glance we can appreciate the cranium, tibias, clavicles, scapula, and some ribs,” the archaeologist said.

The cranium still has hair, and some teeth can be glimpsed, as well as other parts of the skeleton. “The bundle’s characteristics, the position of the skeleton, the shroud and the space in which it was placed indicate this is a pre-Hispanic burial”, explained the specialist of the INAH Center in Hidalgo. He added that it is the only one that has been found up to date, which makes it a unique finding in the entity’s archaeology.

“It is known that in the Mesoamerican beliefs, caves and other rocky refuges were considered entrances to the underworld and the residence of death deities, which is why they served as funerary spaces in most cases,” said the archaeologist.

Physical anthropologist Arturo Gomez was able to determine the age it could have had at death, placing it around 20 years old. “The molars of the skeleton, which appear between 16 and 24 years of age, are without wear”. Specialists are still unsure about its sex, since the important bones for this study (hip bones) are still under the bundle. To be able to analyze and understand other characteristics with precision they will have to open the bundle which will only be done once a restorer can intervene and give the fabric and mat some treatment in order to conserve them.