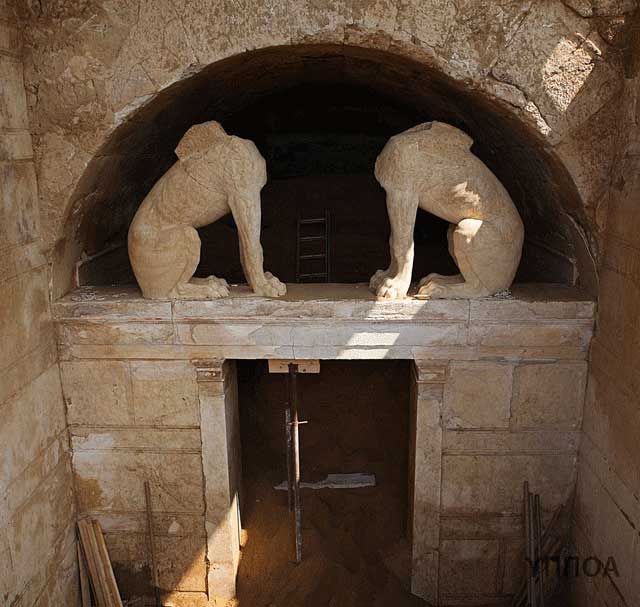 Amphipolis tomb interior is blocked by another wall

Amphipolis tomb interior is blocked by another wall. This is what awaited the archaeologists who managed to uncover the tomb’ s main entrance as well as enter the monument’s first room, which is considered a vestibule.

As the excavation procedure proceeds at Kasta Tumulus, more blocks have been removed from the sealing wall that used to block the entrance, so that the momument’s facade to be revealed almost entirely. The facade displays a highly original composition for this type of Macedonian tomb, dating from the last quarter of the 4th c. BC.

The facade’s decoration is not different from the one of the side walls, with fresco imitating the marble wall of the “peribolos”. The spacing between the pilasters reaches 1,67m. (max). The typology suggests that there were no door panels but the door opening was free.

Following the debris removal from the vestibule’s interior, an inlayed composition of marble plaques appeared under the marble ionic architrave, covering the side walls all along. In a distance of 6m. from the entrance, the upper part of a marble blocking wall bearing an opening on its top left, has been revealed. Behind this wall, two more spaces are visible.

On the blocking wall, a marble architrave, bearing a cornice similar to the one found at the peribolos, has been revealed. The cornice is adorned with eight-leafed embossed rosettes at the height of the architrave of the side walls.

Archaeologists axpect that the blocking wall might bear another door, leading to the monument’s interior. During the following days the team is to remove the debris covering the space behind the door, if this is alowed also by the course of maintenance works taking place in the parts of teh monument which have already been revealed.