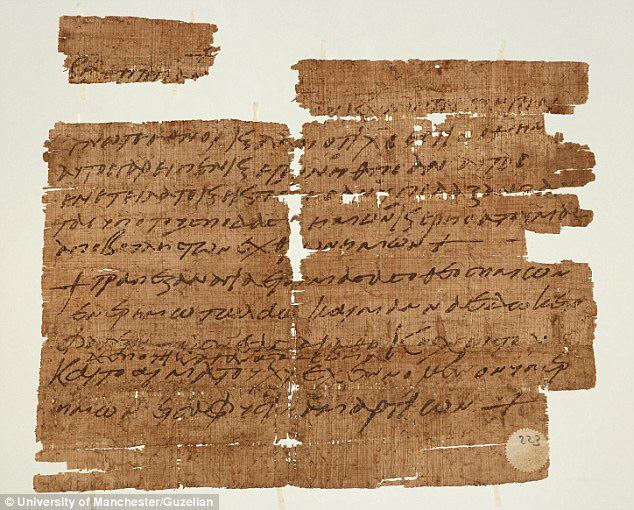 In the University of Manchester’s John Rylands Library

A 1,500 year old papyrus fragment found in The University of Manchester’s John Rylands Library has been identified as one the world’s earliest surviving Christian charms.

Dr Roberta Mazza, a Research Fellow of the recently established John Rylands Research Institute came across the Greek ‘amulet’ while working on thousands of fragments of unpublished historical documents that are kept in the library’s vaults.

According to the researcher, the charm casts important new light on early Christianity – just 300 years after the Roman emperor Constantine converted to the religion.

It shows how Christians adopted the ancient Egyptian practice of wearing amulets to protect the wearer against dangers. This practice of writing charms on pieces of papyrus was continued by the Christians who replaced the prayers to Egyptian and Greco-Roman gods with extracts from the Bible.

Faint lettering on the back of the charm is thought to be a receipt for the payment of grain tax which was certified by the tax collector from the village of Tertembuthis – this is in the countryside of the ancient city of Hermoupolis (modern el-Ashmunein).

Dr Mazza said: “The amulet maker would have cut a piece of the receipt, written the charm on the other side and then he would have folded the papyrus to be kept in a locket or pendant. It is for this reason the tax receipt on the exterior was damaged and faded away.”

The document had been held at the library since around 1901, but its significance had not been realized until Dr Mazza spotted it. She said: “This is an important and unexpected discovery as it’s one of the first recorded documents to use magic in the Christian context and the first charm ever found to refer to the Eucharist – the last supper – as the manna of the Old Testament. The text of the amulet is an original combination of biblical passages including Psalm 78:23-24 and Matthew 26:28-30 among others.

“To this day, Christians use passages from the bible as protective charms so our amulet marks the start of an important trend in Christianity.

“Though we know almost nothing about the owner of the charm, we think it could have been owned by a resident of the village nearby Hermoupolis (el-Ashmunein). We can say this is an incredibly rare example of Christianity and the Bible becoming meaningful to ordinary people – not just priests and the elite.

“It’s doubly fascinating because the amulet maker clearly knew the Bible, but made lots of mistakes: some words are misspelled and others are in the wrong order. This suggests that he was writing by heart rather than copying it.

“It’s quite exciting. Thanks to this discovery, we now think that the knowledge of the Bible was more embedded in sixth century AD Egypt than we previously realized.”

“It is a statement of intent of how the Institute will bring together library and academic staff from inside and outside the University to explore our breathtaking Special Collections. Experienced curators and conservators look after this national treasure of global importance which has rich, untapped potential for research and discovery.

“So by bringing the together the world class expertise at the University’s Faculty of Humanities and the library, we shall help unlock the secrets of these treasures.”

Rachel Beckett, Head of Special Collections at University of Manchester Library and Associate Director of the John Rylands Research Institute said: “This is a truly remarkable discovery, and clearly demonstrates the strength and global significance of the library’s collections. It also demonstrates the value of close collaboration between library staff and academic colleagues, helping us to reveal the riches of the Rylands which is home to many of the finest collections of rare books, manuscripts and archives in the world.”