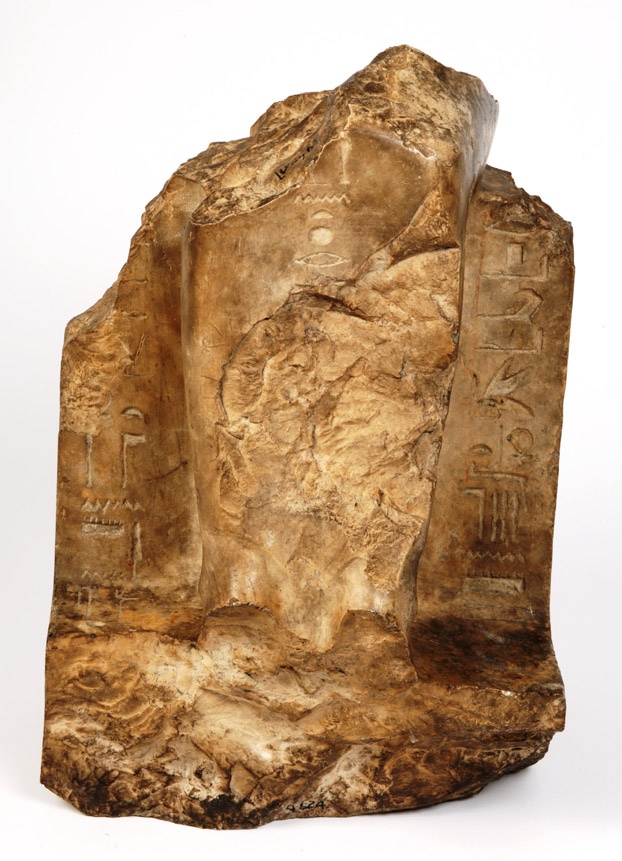 After re-reading his title

A yet unknown fragmentary statue of Senenmut, a top official who acted as the “right hand” of the legendary female pharaoh Hatshepsut, was recently identified in the Museum of Manchester, UK, when the inscription it bears was re-read.

According to Dr. Campbell Price, the Museum’s Egyptian Antiquities curator, the half -lifesize statue, surviving fragmentarily and made of limestone, was found by Edouard Naville in Deir el-Bahari during the excavations there between 1894 and 1907. It once depicted a seated figure wearing a close fitting mantle, of which only the lower part survives. Still, from day one, the Manchester Museum authorities were able to read (and record in the Museum’s catalogue) an inscription spreading on the sides of the figure’s seat, base and over the knees: ” The priest of Amun, Userhat”.

Who was this Userhat, it remained a mystery till last automn, when the statue was viewed by Marburg Professor Rainer Hannig. An expert in Egyptian hieroglyphs -and the author of probably the most detailed Pharaonic Egyptian dictionary released so far- Hannig noted that “the priest of Amun-Userhat” was actually a single title, as Amun-Userhat was an name of the sacred barque of the God Amun kept at Karnak. In addition, the title is recorded to have belonged to one person in history: Senenmut, Hatshepsut’s favourite official and one of the first personalities we truly know as individuals from ancient Egyptian records.

Senenmut famously kept a number of administrative and priestly titles during Hatshepsuts’ reign, including Steward of the God’s Wife, Steward of the King’s Daughter, High Steward of the King, Overseer of the Gardens of Amun, while he functioned as superintendant of works for several monuments, royal tutor and he was even probably accused of being too close to the Queen. At any case, Senenmut is known among other things, for that he had commissioned numerous statues of himself (25 known today), hoping for his memory to last for eternity. Could this be statue no 26?

In his capacity as a tutor for Hatshepsut’s daughter he was famously ( and numerously) portrayed as a seated figure keeping the princess on his knees and wrapped in a long mantle, just like the one the seated man wears in the Manchester statue. Deir el Bahari, the place of the statue’s provenance agrees greatly with the identification as well, as this was ths site where Hatshepsut’s most famous monument, her funerary temple, still survives. Even the other official titles recorded on the statue (‘nobleman’, ‘governor’, and ‘overseer of the priests of Montu’) are in accordance with Senenmut’s titulary.

In a blog announcement concerning the newly found statue, an excited Dr. Price states: “Senenmut’s life has inspired more scholarly and popular writing than almost any other non-royal from Pharaonic times. I am quite sure that this bashed-up fragment, which has lain unrecognised in Manchester for over a century, represents the twenty-sixth attested statue for Senenmut”.