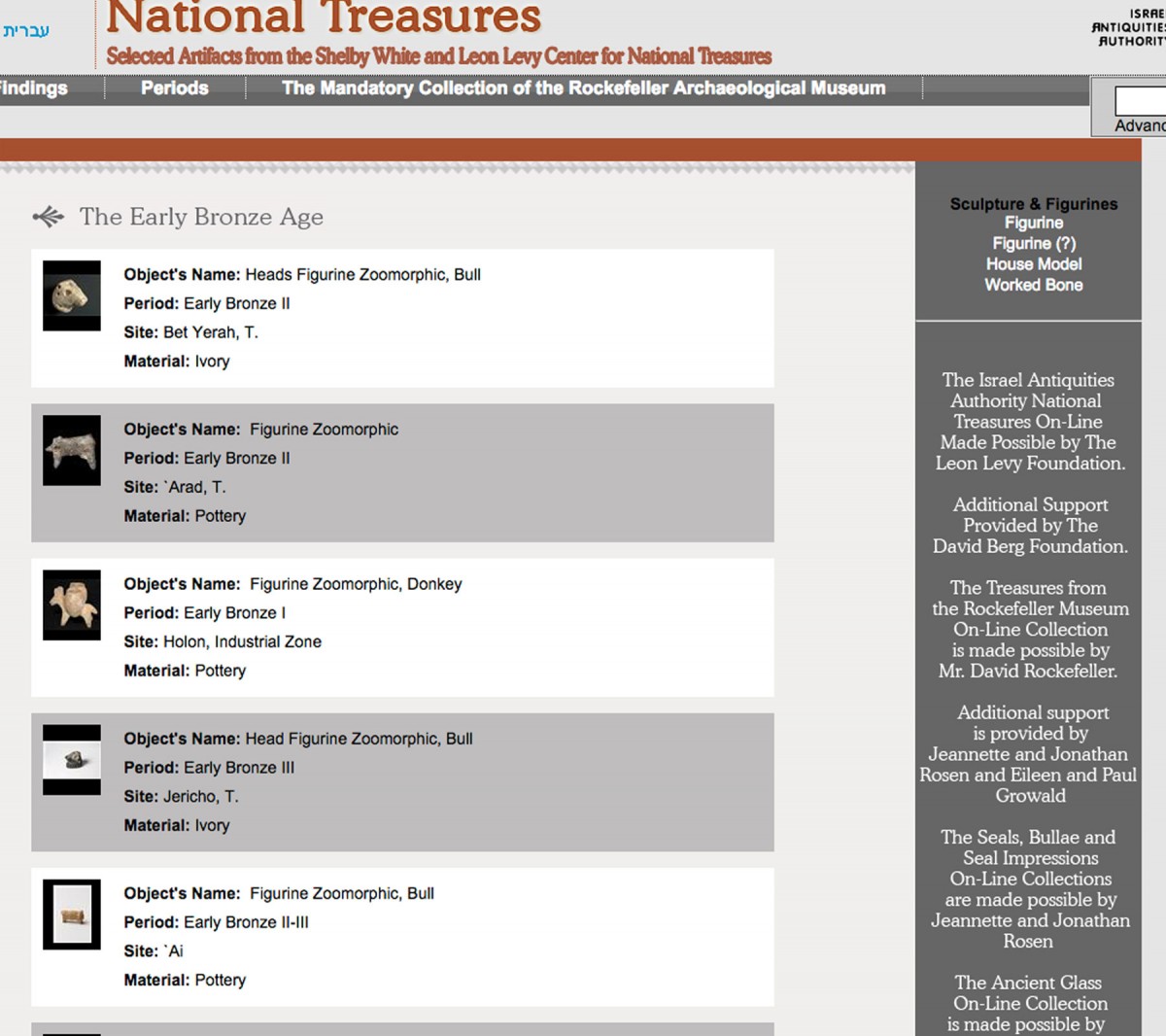 Objects dating from one million BP to the Ottoman period

In its continued efforts to share and make accessible to people around the world the archaeological treasures of the Land of Israel, the Israel Antiquities Authority created the National Treasures Online website: www.antiquities.org.il/t/Default_en.aspx which offers a selection of thousands of objects from the collections of the National Treasures, ranging from one million BP to the Ottoman period. The site, which currently has some 5,700 artifacts, is updated continuously, and new hi-resolution images of artifacts and information are added on a regular basis. The artifacts on the site are arranged both chronologically (according to archaeological periods) and typologically (according to the type of artifact). The artifact’s information card presents detailed archaeological data about the selected artifact, including provenance, type, dimensions, material, site where discovered, dating and bibliography.

Recently, the Israel Antiquities Authority embarked on a major undertaking to make available through the internet, hi-resolution digital images of and information about the rare archaeological collections that are on display in the Rockefeller Museum in Jerusalem. This online project is another example of the IAA’s commitment to providing meaningful, unlimited and easy public access to the nation’s archaeological treasures. The project is made possible by a generous lead gift from Mr. David Rockefeller, son of John D. Rockefeller Jr. who established the museum, with additional support from Paul and Eileen Growald and Jonathan and Jeanette Rosen. This is the first time the entire collection on display of a museum in Israel is being photographed and made available online.

On January 13, 1938, The British Mandatory Government of Palestine opened The Palestine Archaeological Museum in Jerusalem. Known informally at the time as The Rockefeller Museum, because of John D. Rockefeller Jr.’s gift of two million dollars to erect the building and house the collections properly, the museum continues to hold one of the most important collections of archaeological objects excavated in the Land of Israel during the early part of the Twentieth century. More than 5,000 artifacts are in the collection, managed by the Israel Museum, most of which were excavated during the British Mandatory period in the 1920’s and 1930’s at important sites such as the prehistoric caves in the Carmel Mountain, Jericho, Megiddo, Samaria, Beth Shean, Tel El-Ajjul, Khirbet El Mafjar, and Ovdat. The collection spans more than 1.5 million years, from prehistoric periods to the time of the Ottoman Empire.

Having the hi-resolution images and accompanying information available to millions of people anywhere in the world is of tremendous importance to everyone interested in the archaeology and history of the Land of Israel.