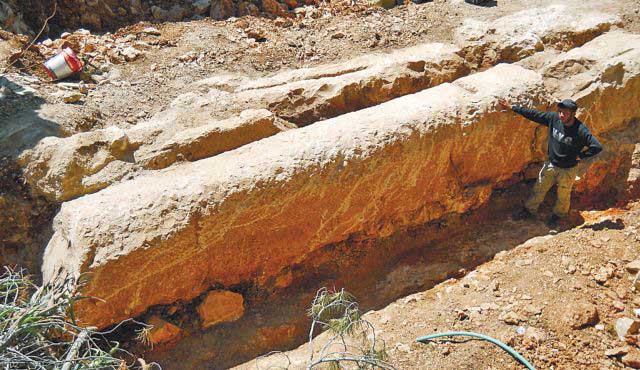 An Israeli archaeologist says he has found the site of a Sixth Century miracle documented by the Byzantine historian Procopius of Caesarea.

In his book The Buildings of Justinian in which the historian recounts the many building projects erected during the reign of the Byzantine Emperor Justinian the Great, in the mid-Sixth Century. Describing the construction of Nea Ekklesia of the Theotokos, a church near Jerusalem, Procopius says that God miraculously provided giant red stones near the construction site.

“God revealed a natural supply of stone perfectly suited to this purpose in the nearby hills, one which had either lain there in concealment previously, or was created at that moment… So the church is supported on all sides by a number of huge columns from that place, which in color resemble flames of fire… Two of these columns stand before the door of the church, exceptionally large and probably second to no column in the whole world,” He wrote.

Recent construction in the Jerusalem neighborhood Rehavia, may have revealed the site of this miraculous quarry. Under the foundations of an old building demolished to make room for new construction a large stone chiseled in the shape of a column.

Upon discovery of the column, the Israel Antiquities Authority halted the construction project and began studying the find, which is 20 ft (6 m) tall and 30 in (80 cm) wide. These proportions correspond to building practices of the period.

The site had no other finds that could be used to time the column but Evgeny Kagan of the Antiquities Authority, believes that it is from the Byzantine period based of the stone type and the methods used by the stonemasons. The stone bares the Arabic name “Mizi Achmar,” meaning red stone, which could correspond to the “flames of fire” described by Procopius.

This kind of stone is considered very difficult to work with. According to Prof. Yoram Zafrir it was hardly used until the introduction of explosives in the 19th Century, except during the Byzantine era. The builders of the Jerusalem Temple for example used a softer stone.

Evidently, the stonemasons in the site also had a hard time working with the stone, since the column that was discovered was apparently left connected to the stone from which it was chiseled because it cracked and the they feared that it would fall apart on its way to the construction site.

Nearby signs of columns chiseled from the stone were found. Prof. Zafifr believes they were used in the construction of a impressive church, though not necessarily the Nea Ekklesia of the Theotokos described by Procopius.