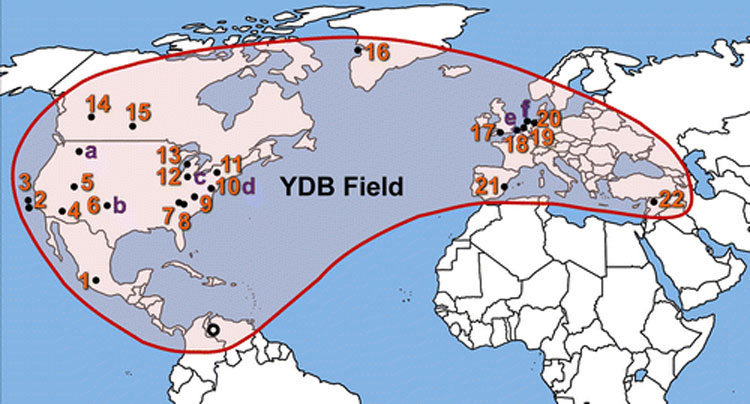 Around 12,800 years ago, a sudden, catastrophic event plunged much of the Earth into a period of cold climatic conditions and drought. This drastic climate change—the Younger Dryas—coincided with the extinction of Pleistocene megafauna, such as the saber-tooth cats and the mastodon, and resulted in major declines in prehistoric human populations, including the termination of the Clovis culture.

With limited evidence, several rival theories have been proposed about the event that sparked this period, such as a collapse of the North American ice sheets, a major volcanic eruption, or a solar flare.

However, in a study published in The Journal of Geology, an international group of scientists analyzing existing and new evidence have determined a cosmic impact event, such as a comet or meteorite, to be the only plausible hypothesis to explain all the unusual occurrences at the onset of the Younger Dryas period.

Researchers from 21 universities in 6 countries believe the key to the mystery of the Big Freeze lies in nanodiamonds scattered across Europe, North America, and portions of South America, in a 50-million-square-kilometer area known as the Younger Dryas Boundary (YDB) field.

Microscopic nanodiamonds, melt-glass, carbon spherules, and other high-temperature materials are found in abundance throughout the YDB field, in a thin layer located only meters from the Earth’s surface. Because these materials formed at temperatures in excess of 2200 degrees Celsius, the fact they are present together so near to the surface suggests they were likely created by a major extraterrestrial impact event.

In addition to providing support for the cosmic impact event hypothesis, the study also offers evidence to reject alternate hypotheses for the formation of the YDB nanodiamonds, such as by wildfires, volcanism, or meteoric flux.

The team’s findings serve to settle the debate about the presence of nanodiamonds in the YDB field and challenge existing paradigms across multiple disciplines, including impact dynamics, archaeology, paleontology, limnology, and palynology.