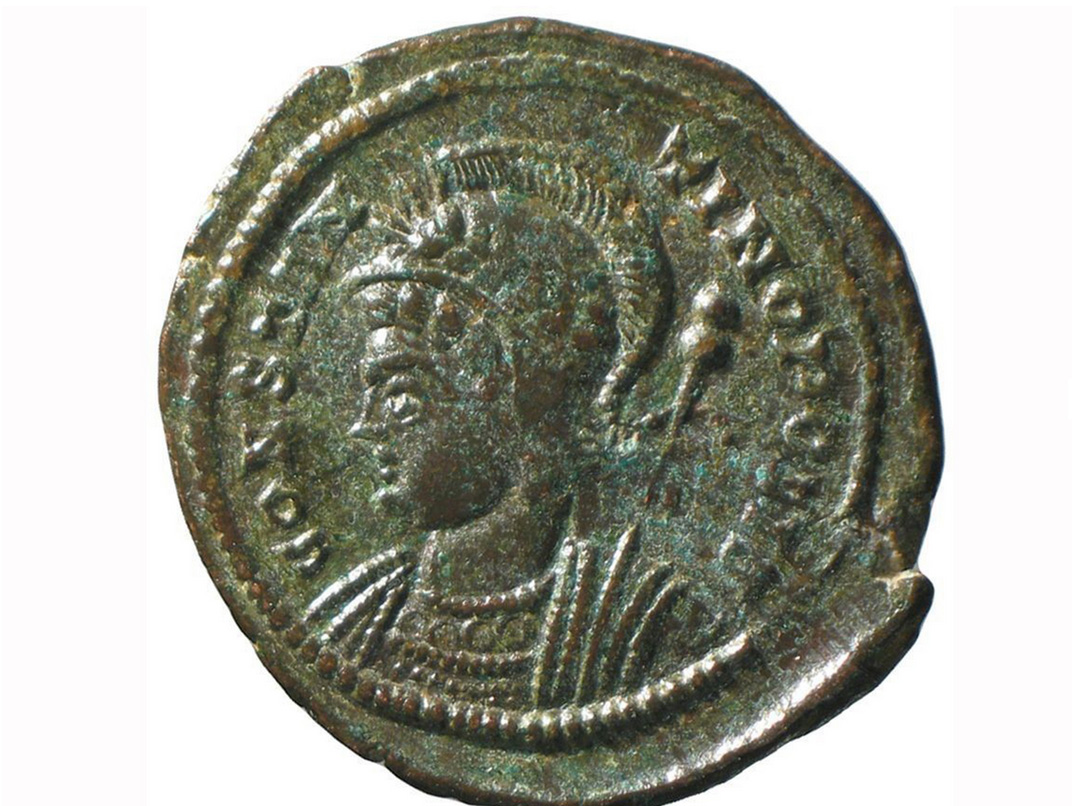 The ‘Seaton Down Hoard’, one of the largest and best preserved 4th century collections

A hoard of 22,000 Roman coins has been unearthed on land near Seaton in Devon. University of Exeter archaeologist Danielle Wootton, the Devon Finds Liaison Officer for the Portable Antiquities Scheme (PAS) was informed about the copper-alloy Roman coins.

The ‘Seaton Down Hoard’ is recognised as being one of the largest and best preserved 4th century collections to have ever been found in Britain.  It is also the one millionth find recorded by PAS since it was founded in 1997.

The copper alloy coin, called a nummus, was struck in AD 332 at the mint of Lyon (Gaul). It shows the personification of Constantinopolis on the obverse and a Victory on prow on the reverse. This very common type was struck by Constantine the Great across the Empire to celebrate the inauguration of the new city of Constantinople, which was to become the capital of the Eastern Empire.

The discovery was made in 2013 by Devon builder and metal detector enthusiast Laurence Egerton who was operating under licence on private land near the previously excavated site of a Roman villa at Honeyditches in East Devon. Egerton reported the find in accordance with the Treasure Act 1996 to the landowner Clinton Devon Estates, Devon County Council’s County Archaeologist and the British Museum’s Portable Antiquities Scheme (PAS) who informed the Coroner.

The hoard was declared Treasure at a Devon Coroner’s Inquest on 12 September 2014 which means it will be eligible for acquisition by a museum after valuation by the Treasure Valuation Committee.

Danielle Wootton commented on the actions of the finder, she said:“Having realised the significance of his discovery, Laurence acted responsibly in reporting the find to both the landowner and the Portable Antiquities Scheme. This ensured that the remainder of the coins were properly excavated by a team of archaeologists funded by Devon County Council. Thereby enabling the hoard of coins to be examined in detail by a team of conservators and Roman coin experts at the British Museum.”

The Roman coins were carefully removed by a team of archaeologists and over the past 10 months the coins have been lightly cleaned and the process of identification and cataloguing has begun by experts at the British Museum, revealing an important part of Britain’s history.

The recording of over one million objects on finds.org.uk since the Portable Antiquities Scheme (PAS) was founded, is testimony to the enormous success of the scheme, which allows finds discovered by members of the public to be recorded for the benefit of researchers and the public alike.  Danielle Wootton, based at the University’s archaeology department, records finds over 300 years old including flint, coins and metal objects from across the county of Devon.  Recording finds no matter how small or apparently insignificant all help to build up a picture of how people lived in Devon over thousands of years.

County Archaeologist Bill Horner said: “The majority of the coins are so well preserved that they were able to date them very accurately. This is very unusual for Devon because the county, as a whole, has slightly acidic soil which leads to metals corroding. The soil in this area is chalky which is why they’ve survived so well.”

Buried together in an isolated pit, the lozenge shape of the hoard suggests the coins were in a fabric or leather bag which has not survived. Experts believe the coins could have been the savings of a private individual, a soldier’s wages or a commercial payment.

Despite the number of coins found, the financial value, however, would not have been great, amounting to four gold coins (solidi) which would have provided the ration of two soldiers for one year or a worker’s pay for two years.

Horner added:“There were no High Street banks, so a good, deep hole in the ground was as secure a place as any to hide your savings in times of trouble, or if you were going away on a long journey. But whoever made this particular deposit never came back to retrieve it.”

Under the Treasure Act 1996, now that the hoard has been declared Treasure by a coroner, it has to be offered to an accredited museum to acquire. Exeter’s Royal Albert Memorial Museum (RAMM) has said it would love to keep the hoard in Devon so that it can be seen by the public for the first time in over 1500 years.