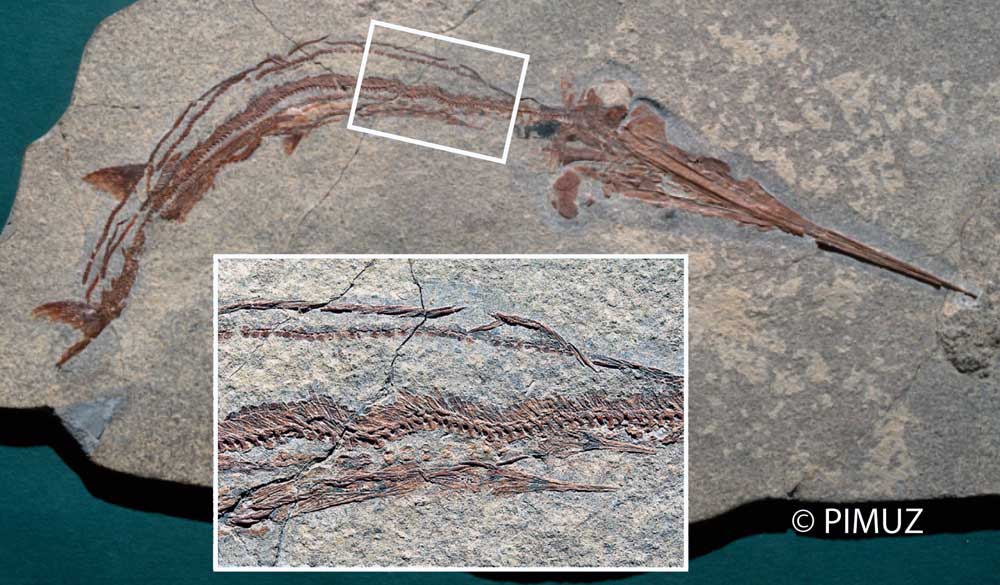 Mass extinction led to many new species of bony fish

reveal paleontologists from the University of Zurich

With over 30,000 species worldwide, the ray fins are currently the largest group of fish. These bony fish were not always as numerous, however. Losses of other fish species, such as cartilaginous fish, helped them to spread successfully. As paleontologists from the University of Zurich together with international researchers reveal, a series of serious extinction events between 300 to 200 million years ago played a central role in the development of today’s fish fauna.

Today, ray-finned fish, which belong to the bony fish, are by far the most biodiverse fish group in both salt- and freshwater. Their spectacular variety of forms ranges from eels, tuna, flounders and angler fish all the way to seahorses. With around 1,100 species, the second most biodiverse group is the cartilaginous fish, which are almost exclusively marine and include sharks, rays and chimaeras. Exactly why bony fish managed to prevail in different habitats is the subject of debate: Do they have a better body plan, which is suited to more ecological niches than that of the cartilaginous fish? Or are other factors involved in their successful distribution? Paleontologists from the University of Zurich now reveal that climate catastrophes in the past played a crucial role in the dominance of ray-finned fish today.

The scientists studied the changes in biodiversity among cartilaginous and bony fish during the Permian and Triassic periods around 300 to 200 million years ago – an interval marked by several serious extinction events. They evaluated the global scientific literature on bony and cartilaginous fish from the last 200 years and collected data on diversity and body size, the latter providing an indication of the fish’s position in the food chains in the seas and freshwater.

Based on the data evaluated, the researchers demonstrate that cartilaginous fish, the most biodiverse fish group at the time, especially suffered heavily during an extinction event in the Middle Permian epoch while the Permian ray-finned fish escaped relatively unscathed. After an even bigger mass extinction close to the Permian-Triassic boundary, which wiped out 96 percent of all sea organisms, these bony fish diversified heavily. Of the ray-finned fish, the so-called Neopterygii (“new fins”) became particular biodiverse during the Triassic and, with over 30,000 species, today constitute the largest vertebrate group. Triassic Neopterygii primarily developed small species while the majority of the more basal ray-fins produced large predatory fish. Moreover, many bony fish developed morphological specializations in the Triassic, such as in the jaw apparatus, dentition or fins. This enabled new ways of locomotion, including gliding over the surface of the water, much like flying fish do today. Moreover, there is also evidence for viviparity in Triassic bony fish, for the first time ever.

Unlike bony fish, cartilaginous fish, which had already been heavily decimated by the end of the Permian, did not really recover. Many groups that were still biodiverse in the Permian disappeared completely or became extremely rare during the extinction events of the Permian and the Triassic. “Our results indicate that repeated extinction events played a key role in the development of today’s fish fauna,” explains Carlo Romano, a postdoc at the University of Zurich’s Paleontological Institute and Museum. Most of these severe crises are linked to massive volcanic activity, global climate changes and sea level lowstands.