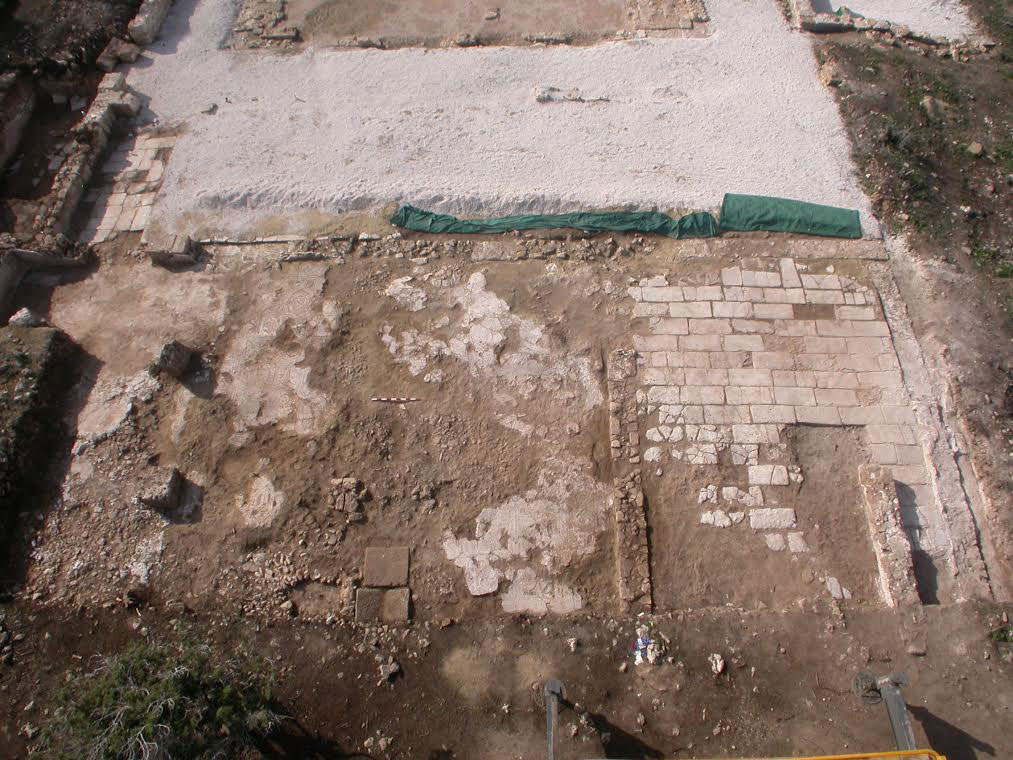 Postgraduate archaeologists from Cyprus (Doria Nicolaou, Panagides Panagiotis, Papantoniou Maria) and abroad  (S.J. Boughton, A. Blanks, G. Lantz, S. Dalton, L. Intelmann), took part in the excavations, the latter within the framework of the Leonardo da Vinci –GrEASE (Graduate European Archaeological Skills Exchange) European Educational program. The excavation is supported by the mosaics conservation team of the Department of Antiquities, under the direction of Dr Eleutherios Charalambous and by draughtsperson Mrs Mairy Tsiamberlain, Τechnician at the Department of Antiquities. A team of veterans of the British army also participated in the excavations, under a rehabilitation project. The excavation is also the site of an archaeological educational program for elementary school children.

The ruins of the site surround a shallow basin of the Akrotiri forest in the shape of the greek letter Π and the investigations, conducted at the site since 2007, run along the south wing of this complex. This wing includes two churches (Buliding A and B) flanking the west and east side of a peristyle atrium (surrounded with porticoes). Adjacent rooms for installations were located to the south of the transept and the atrium and a workshop to the north of the atrium. Entrance openings were found at the edges of the porticoes of which the southern ones join the Buildings with the interior spaces, whereas the northern ones lead to the sides of a large atrium/yard situated in the middle of the whole Π complex.

During the last two years (2013 and 2014) investigations have focused on Building B to the east of the eastern portico. An exastyle propylon (monumental entrance with six columns) was revealed and the western part of the new building (20m wide) which is divided in three aisles. The total length of Building B, including the propylon is estimated to be more than 47 metres.

In contrast to what was found in Building A (the floors were found to be fully covered with mosaics) the floors of Building B were found to be covered both with mosaics (central-south aisle), and Cypriot gypsum slabs (north aisle). Only parts of the decoration of the central aisle have been preserved in three zones of which the central one is narrower and shapes an axial corridor. Within this corridor, and close to the central opening of the tribelon, a very important inscription was uncovered in a circle (medallion) related with hymns of the Divine Liturgy which in later sources are chanted during the First Entrance (Lesser Introit) in the Liturgy of the Presentation of Virgin Mary.

A large amount of marble fragments from columns and Corinthian capitals was found as well as limestone ones, mainly from cornices set over horizontal architraves, some of which were found intact and decorated with acanthus leaves in relief. Fragments of transenna chancels (from intercolumnial spaces or window openings) were excavated as well as tables made from luxurious imported marbles and a large amount of colorful and gold plated tesserae, indicating an extensive surface of wall mosaic decoration.

The two ecclesiastical Buildings, their arrangement, the inscriptions, as well as the finds all compose an extremely important complex not only for the history and the archaeology of the island but also for the study of the evolution of the Divine Liturgy in the 7th century.