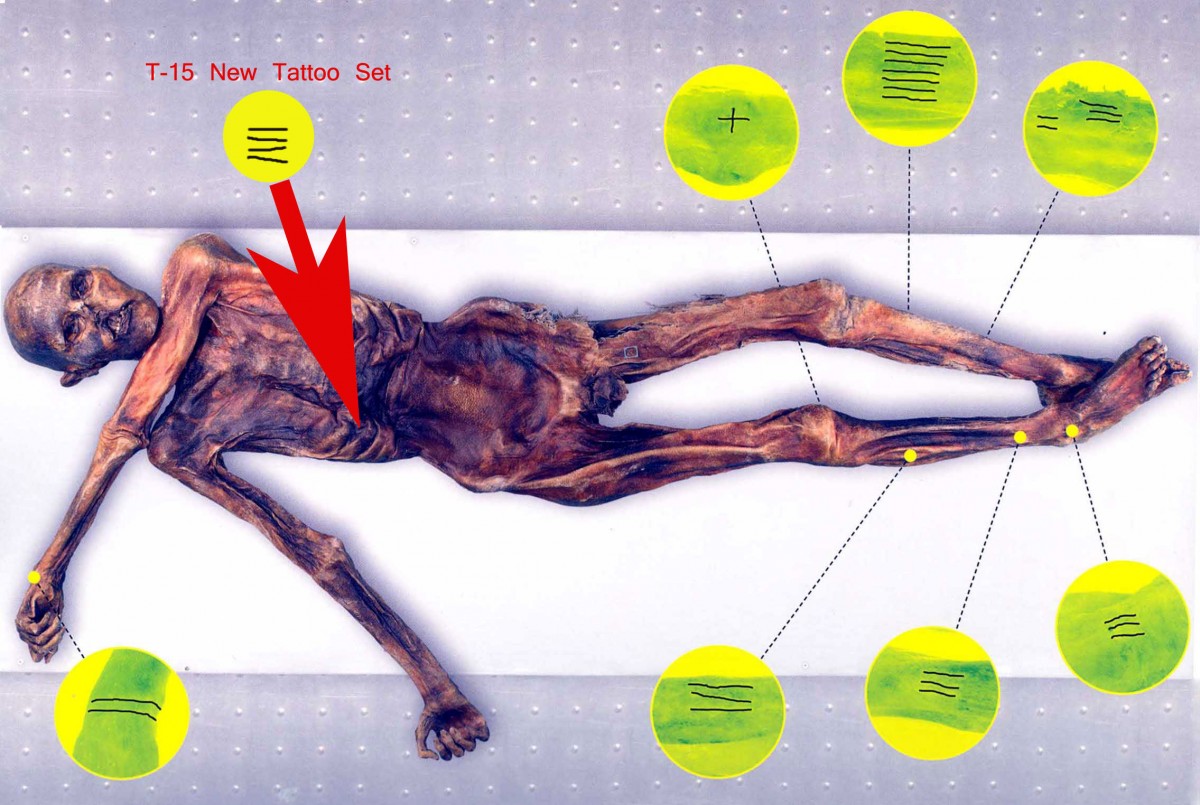 With the aid of a non-invasive photographic technique, researchers at the EURAC-Institute for Mummies and the Iceman have been able to show up all the tattoos on the man who was found preserved in a glacier, and in the process have stumbled upon a previously unknown tattoo on his ribcage. This tattoo is very difficult to make out with the naked eye because his skin has darkened so much over time. The latest sophisticated photographic technology has now enabled tattoos in deeper skin layers to be identified as well.Oetzi’s discoverers had already noticed his tattoos on the very day they found him, 19th September 1991. Various studies since then have investigated and itemised these skin marks. But now, using a technique which he developed himself, Marco Samadelli, a scientist at the EURAC-Institute for Mummies and the Iceman has carried out a complete mapping of all the tattoos on the man from the glacier. They are amongst the oldest documented tattoos in the world.

Samadelli photographed the mummy’s body from different angles using a multi-spectral procedure which covered the whole range of wavelengths from infrared to ultraviolet. This allowed tattoos deep in the skin layers and which are no longer recognisable to the human eye to be shown up with great precision. The 61 discovered skin markings on Oetzi’s body consist of lines from 0.7 to 4 centimetres in length, mostly arranged in groups of two, three or four parallel lines, and also include two crosses.

The newly discovered tattoos on the lower right-hand side of the ribcage are striking, because the other markings are mostly found on his lower back and the legs between the knee and the foot. On account of the various locations of the tattoos, some researchers suspected that the marks were part of some therapeutic medical treatment, a kind of acupuncture to relieve pain in the joints. The newly discovered tattoos on the ribcage have now reopened the debate about the role of tattoos in prehistoric times. This investigation has given researchers a new piece to add to the jigsaw puzzle when trying to tease out whether prehistoric tattoos had a therapeutic, symbolic or religious significance.

The multi-spectral photographs were shot in the mummy’s specially refrigerated ‘cell’ in the South Tyrol Museum of Archaeology. “Each shot was taken seven times, using a different wavelength each time. This enabled us to cover the different depths at which the carbon powder used for the tattoos had been deposited. The ultraviolet waves were adequate for the upper skin layers, whilst we resorted to infrared light for the lower layers,” explains Marco Samadelli.