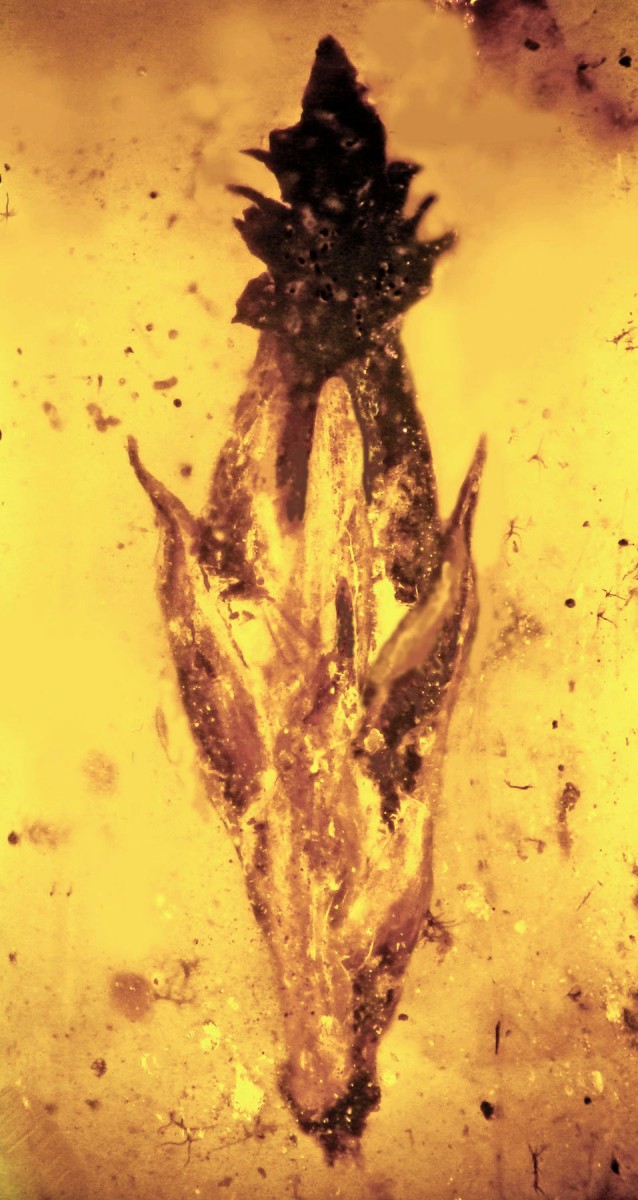 The earliest grass specimen ever discovered

A perfectly preserved amber fossil from Myanmar has been found that provides evidence of the earliest grass specimen ever discovered – about 100 million years old – and even then it was topped by a fungus similar to ergot, which for eons has been intertwined with animals and humans.

Ergot has played roles as a medicine, a toxin, and a hallucinogen; been implicated in everything from disease epidemics to the Salem witch trials; and more recently provided the hallucinogenic drug LSD.

Apparently both ergot and the grasses that now form most of the diet for the human race evolved together.

And if they already seemed a little scary, imagine a huge sauropod dinosaur that just ate a large portion of this psychotropic fungus, which in other animal species can cause anything from hallucinations to delirium, gangrene, convulsions or the staggers. The fungus, the grasses it lived on and dinosaurs that ate grass co-existed for millions of years.

The findings and analysis of this remarkable fossil were just published online in the journal Palaeodiversity, by researchers from Oregon State University, the USDA Agricultural Research Service and Germany.

“It seems like ergot has been involved with animals and humans almost forever, and now we know that this fungus literally dates back to the earliest evolution of grasses,” said George Poinar, Jr., an internationally recognized expert on the life forms found in amber and a faculty member in the OSU College of Science.

“This is an important discovery that helps us understand the timeline of grass development, which now forms the basis of the human food supply in such crops as corn, rice or wheat,” Poinar said. “But it also shows that this parasitic fungus may have been around almost as long as the grasses themselves, as both a toxin and natural hallucinogen.

“There’s no doubt in my mind that it would have been eaten by sauropod dinosaurs, although we can’t know what exact effect it had on them.”

Amber begins as a tree sap that can flow around small plant and animal forms and permanently preserve them, as it fossilizes into a semi-precious stone. Poinar is a world leader in examining such specimens and using them to learn more about prehistoric ecosystems.

The fungus in this grass specimen, which is now extinct, was named Palaeoclaviceps parasiticus. It’s very similar to the fungus Claviceps, commonly known as ergot. The fossil, taken from amber mines in Myanmar, dates 97-110 million years ago to the early-to-mid Cretaceous, when the land was still dominated by dinosaurs and conifers, but the earliest flowering plants, grasses and small mammals were beginning to evolve. The fossil shows a grass floret tipped by the dark fungus.

Much later in evolution, grasses would become a powerful life form on Earth, creating vast prairies, nourishing herds of animals, and eventually providing for the domestication of range animals and the cultivation of many food crops. The rise of crop agriculture changed the entire development of the human race, and it’s now estimated that grasses compose about 20 percent of global vegetation.

Researchers also noted in their report that “few fungi have had a greater historical impact on society than ergot.”

Some grasses have natural defense mechanisms, and ergot may be one of them, helping to repel herbivores. It’s bitter and not a preferred food to livestock, and it’s still a problem in cereal and grass seed production, as well as pastures and grazing land.

In animal and human history, the fungus has been known to cause delirium, irrational behavior, convulsions, severe pain, gangrenous limbs and death. In cattle it causes a disease called the “Paspalum staggers.” In the Middle Ages it sometimes killed thousands of people during epidemics when ergot-infected rye bread was more common. It’s been used as a medicine to induce abortion or speed labor in pregnant women, and one researcher – whose findings have been disputed – suggested it may have played a role in the Salem witch trials.

More than 1,000 compounds have been extracted or derived from it, some of them valuable drugs. They also included, in the mid-1900s, the powerful psychedelic compound lysergic acid diethylamide, or LSD, that is still being studied and has been widely used as an illegal recreational drug.

Ergot is strange. And a very, very old fossil now makes clear that it’s been around about as long as grass itself.