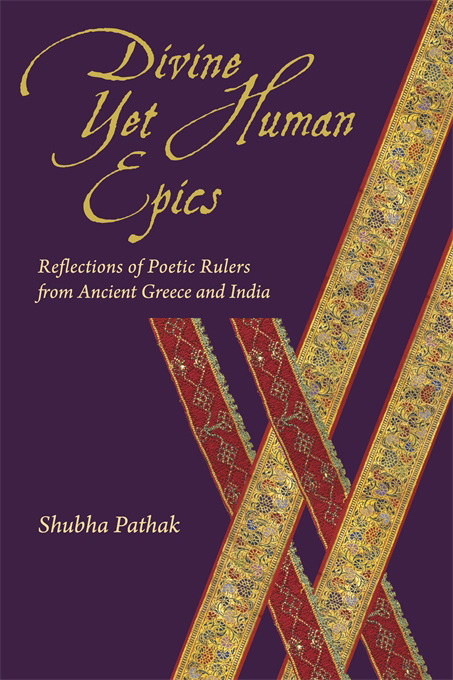 Divine Yet Human Epics: Reflections of Poetic Rulers from Ancient Greece and India

The Center for Hellenic Studies features Shubha Pathak’s Divine Yet Human Epics: Reflections of Poetic Rulers from Ancient Greece and India, available through Harvard University Press and soon to be published online at the CHS website, as well.

The central character of Divine Yet Human Epics is the developing conception of epic itself. Its story unfolds as the ancient Greek idea of epic originates with Pindar and Herodotus on the basis of the Iliad and Odyssey. While this notion eventually leads their Sanskrit counterparts, the Rāmāyaṇa and Mahābhārata, to be understood selectively in modern times, medieval readers Ānandavardhana and Rājaśekhara reveal distinctive features of these ancient Indian poems earlier in this exegetical tale.

Shubha Pathak’s interpretative account concludes with a new way to connect these primary epics to their Greek analogues. Both epic pairs feature poetic kings who together affirm and interrogate their societies’ central religious ideals: Greek kléos (or heroic glory, which assuages uncertainty about the afterlife) and Indian dharma (or righteousness, which counters encroaching immorality). The Greek and Sanskrit epics, by showing both the divine ease and the human difficulty with which kléos and dharma are achieved, employ similar teaching strategies to address the shared psychological needs of human beings learning to live within the disparate cultures of ancient Greece and India. This cross-cultural comparative study thus provides a more comprehensive perspective on the poems’ religiosity than the vantage points of Hellenists or of Indologists alone.

Shubha Pathak is Associate Professor of Philosophy and Religion at American University. In addition to teaching courses on comparative philosophy and comparative religion, she is researching Greco-Roman and Indian epics in their original and later literary forms, focusing on their theological and narratological dimensions. Aside from Divine Yet Human Epics, her edited volume, Figuring Religions: Comparing Ideas, Images, and Activities (State University of New York Press, 2013), shows how metaphor and metonymy theories can be used in comparative religious studies.