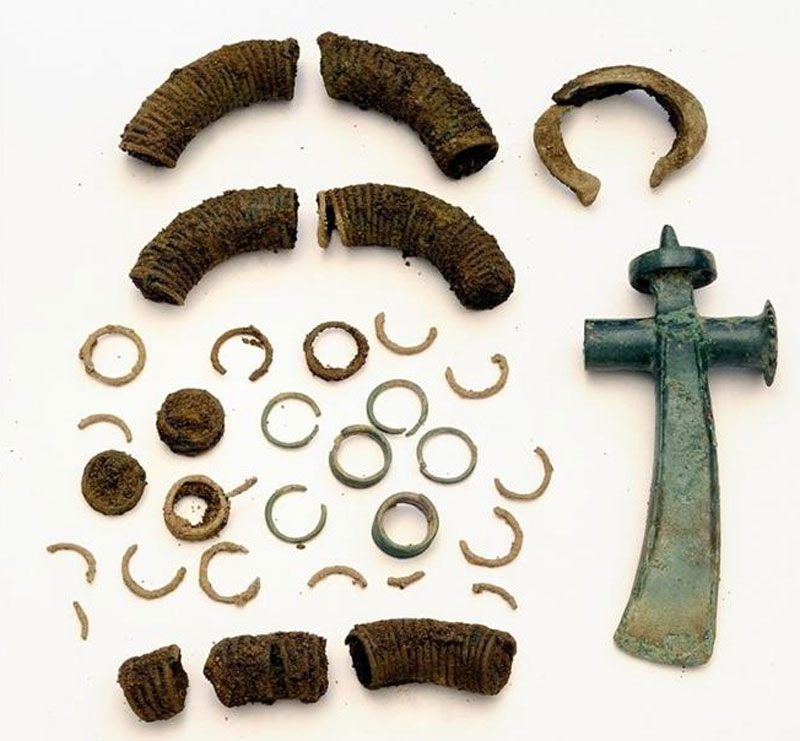 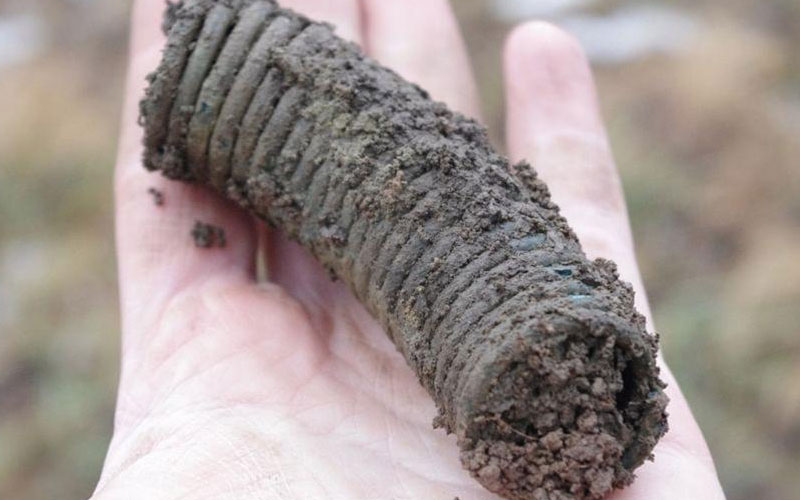 A treasure containing bronze objects has been discovered in Rzepedź in Bieszczady Mountains of east Poland. The 3,500 year-old items had found their way to today’s Podkarpacie from beyond the Carpathians. Archaeologists made the discovery after a walker stumbled upon an ice axe sticking out of the ground. The objects were inside an upturned pot.

“All the objects are made of bronze. The treasure contains a pickaxe, dozens of fragments of a spiral necklace and a bracelet of with recurving endings,” said Piotr Kotowicz, an archaeologist at the Historical Museum in Sanok.

Ice axe and jewellery fragments were hidden in a clay jug with a diameter of 25 cm. Before burying it in a pit, the vessel was turned upside down.

The discovery in Rzepedź was made accidentally. A few days ago, while walking, Łukasz Solon from Sanok noticed an ice axe sticking out of the ground. After Solon contacted the Sanok museum, archaeologists went to the find spot to find out that the ice axe was just one of many finds.

“For me, as an archaeologist it is very important that after finding one object the discoverer did not explore the place further himself, but reported the discovery and waited for specialists. This approach is commendable, and from the point of view of archaeology, it means preserving a lot of information that are unrecoverable after amateur exploration of a treasure such as the one from Rzepedź,” said Kotowicz.

According to Kotowicz, the discovered objects were probably made south of the Carpathians. “The treasure is probably related to the communication route, which ran from the nearby Łupków Pass through the Osława and San valleys”.

The bronze artefacts from Rzepedź have been preliminarily dated to approx. 1500 BC. “We do not yet know who and why had hidden the treasure so carefully. Axe and jewellery are most likely related to the Piliny culture, who then existing south of the Carpathians,” noted Kotowicz.

In the 1990s in Trzcinica near Jasło, approx. 30-40 km from Rzepedź, archaeologists discovered Poland’s oldest fortified settlements dating back more than four thousand years, with strong Transcarpathian influence. Later, between 1650 and 1350 BC, the area was inhabited by the highly civilised Transcarpathian Otomani-Füzesabony culture.

The current ongoing survey conducted by the local conservation office in Krosno is a prelude to a broader research. Researchers hope to find out whether the discovery is isolated, or had been buried within a settlement from that period.