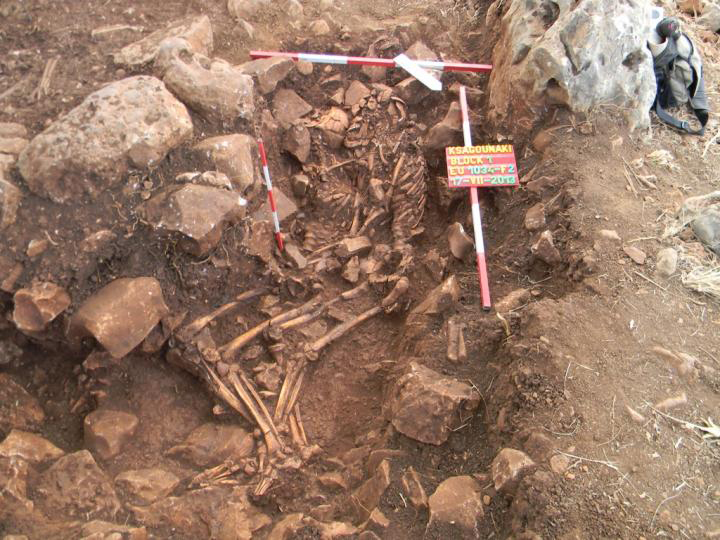 In the framework of the five-year Diros Project

Recent research by The Diros Project, a five-year excavation program in Diros Bay, Greece, has uncovered the remains of an ancient town and burial complex that date to the Neolithic and Bronze Age.

In addition to the Neolithic ‘spooning’ couple that has been highlighted in recent news articles, the archaeological team also uncovered several other burials and the remains of an ancient village that suggest the bay was an important center in ancient times. Located outside the entrance to Alepotrypa Cave, the site of Ksagounaki yielded Neolithic buildings and adult and infant burials that indicate the sites together were part of one huge ritual and settlement complex.

Although Alepotrypa Cave was used for domestic and ritual uses throughout the Neolithic period (ca. 6300-3000 BC), radiocarbon dates indicate that the site of Ksagounaki was used during the Final Neolithic period, 4200-3800 BC. This period in Greece is noted for wide trading networks, as well as the introduction of copper tools, laying the groundwork for the subsequent Bronze Age.

The Field Museum’s Dr. William Parkinson explains that perhaps the most surprising discovery was a Mycenaean-period burial structure, filled with the disarticulated bones of dozens of individuals accompanied by Late Bronze Age painted pottery, exotic stone beads, ivory, and a Mycenaean dagger made of bronze. Parkinson and his team have suggested that the megalithic buildings at Ksagounaki, constructed during the Neolithic Age, may have attracted the attention of Mycenaeans over 2,000 years after they were abandoned.

The Diros Project was coordinated by the Ephorate of Palaeoanthropology and Speleology of the Ministry of Culture, under the direction of Dr. Giorgos Papathanassopoulos (Honorary Ephor of Antiquities). The project focused on the publication of finds from Alepotrypa Cave, the survey of the surrounding area, and excavations at Ksagounaki. In 2011, following a season of archaeological survey, the site was further investigated. Excavations began at the site in 2012 and concluded in 2014.