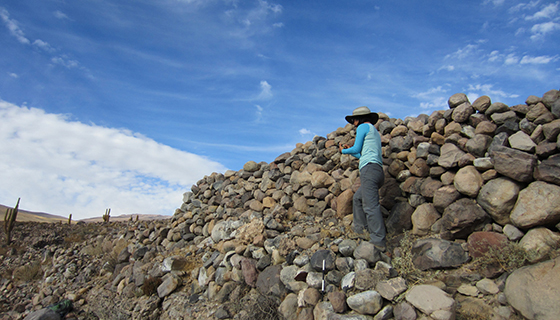 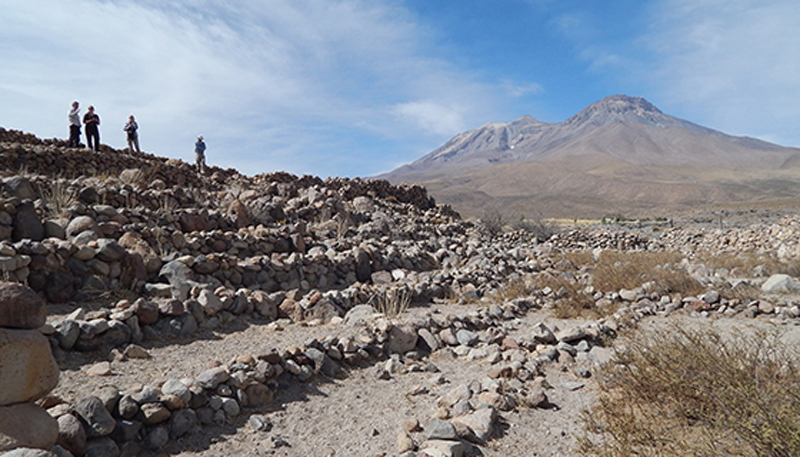 Studying farming in the driest desert in the world

High in the Atacama Desert, around 10,000 feet, anyone with a computer and Google Earth can look at the fields around Turi, Chile and see small neatly laid out fields, terraced and lined with rocks. No crops are growing there now, but it looks as though the farmers laid down their stone hoes and just walked away.

University of New Mexico Associate Professor of Anthropology Frances Hayashida says that is more or less what they did more than 500 years ago. The climate is so dry the fields and the elaborate irrigation systems are almost perfectly preserved.

“These are systems that were developed about 1000 A.D. when people figured out how to divert water from springs which are recharged by snowmelt from the Andes,” says Hayashida. There wasn’t much water even then. Anthropologists haven’t yet tried to calculate exactly how much farmers had to work with, but farming was always marginal here.

It was conquest, first by the Incas, then by the Spanish that changed lifestyles of the indigenous people and made copper mining into a local industry. The Incas conquered this land in the early 1400’s.

“We think they brought in workers to work in the mines. They put in an extensive road system to be able to move ore and personnel back and forth,” says Hayashida. “But then they need to be able to feed everybody, right? So what happens to farming and water and farmers when they were conquered by the Incas and pulled into this bigger economy? That’s what our research is about.”

An international consortium in a remote desert community

Hayashida is working with an international consortium of researchers from Chile, Spain and the United States. They have shared grant money from the Spanish Ministry of Culture, National Geographic, Wenner-Gren Foundation for Anthropological Research, the National Science Foundation and its Chilean equivalent CONICYT so they can work together to understand how the forces of history and climate changed life in this very remote desert community.

Collaboration is a challenge since the researchers work on different continents and have conflicting work schedules. In April, they will have a rare chance to get together in Santa Fe where they will be hosted by the School for Advanced Research. “We can sit around a table and everyone can present their research and where they are at this point. Then we can start planning what we want to do next and what publications we want to get out.” The visit will be brief. Several members of the group will go on to present their latest findings at the Society of American Archaeology meeting in San Francisco.

Hayashida says they are interested in understanding exactly what the farmers were growing. They are examining the stone hoes for fragments of plants and searching for plant remains in the local garbage heaps and packrat middens to identify what they grew and understand whether the local varieties of maize, quinoa, and potatoes were different from varieties grown in the region today.

They’ve found many grinding stones at the site. Chilean archaeologists who have worked here since the 80’s think the stones might have something to do with producing maize beer.

“One of the things that the Incas did in their plazas throughout the length and breadth of the empire was have big feasts, for ritual purposes, but also to show how generous they were to the conquered people,” says Hayashida. “This is something you would normally do with your neighbors, if they were working for you. You provide food and drink. So they just took this practice and did it on an imperial scale.”

The archaeologists led by the Spanish team members are working with students from Chile and the U.S. to map the sites with drones. There is no vegetation and the canals that the farmers used are so coated with calcium carbonate that it is easy to follow the mineral trail of the water.

Hayashida says it’s clear the farmers used every bit of land and every bit of water they could access just to make a living, and fields seem to be designed to carefully conserve water. There are still a few farmers here, and the archaeologists are talking to them to understand how they are able to grow anything in this desert.

Most of the water in this part of the Atacama Desert now is used in the copper mines and to support the local population that is gathered in the nearby city of Calama. Hayashida says this is a fascinating project for her. “It’s just a spectacular landscape, with this spectacular archaeology that is related to questions that I am interested in, which have to do with water management and agriculture.” She has spent years working in the coastal regions of Peru, researching the influence of the Incas and other societies on agricultural production on a much larger scale.

The archaeologists are likely to return to the fields later this year. There is still a lot of work to be done on the ground.