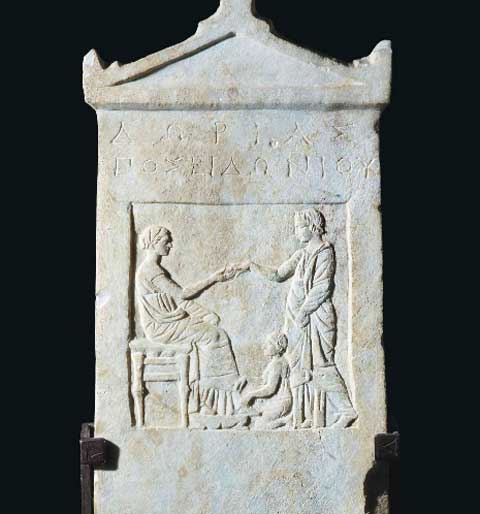 The ancient Chalkis stele was sold in London

In a Christie's auction

A Greek marble funerary stele of the 4th c. BC was sold yesterday at a Christie’s auction for 135,000$. The Hellenic Ministry of Culture claims the stele had been taken from an ancient cemetery of Chalkis.

Christie’s says the stele belongs to a private collection in France and was acquired prior to 1994. Greek authorities however noted there are proofs that the stele had been registered on Greek grounds after the country’s liberation, thus the export of the artefact is illegal.

In an announcement released yesterday, the Greek Ministry of Culture made clear that it systematically follows the auctions of cultural goods and, in case an illegal export of a cultural object at auction is legally substantiated, it will take all necessary legal steps. In this context, the Directorate of the National Archive of Monuments, Documentation and Protection of Cultural Goods has called for the withdrawal of the 4th c. BC funerary Chalkis stele from Christie’s auction.

Christie’s answered they examined the information given by the Greek Ministry of Culture. Based on their surveys and the British law, however, as they said, they were convinced the auction could go on as planned. “That is why we haven’t withdrawn this specific object”.

It should be noted that four other objects have already been withdrawn from Christie’s antiquities auction, after having been identified by Glasgow University researcher, Dr Christos Tsirogiannis, in collaboration with Interpol and the Italian authorities: three ancient Greek pots and an Etruscan head, all of Italian origin. The estimate of these objects is more than 100,000 pounds.

Dr Christos Tsirogiannis is Research Assistant in the Scottish Centre for Crime and Justice Research at the University of Glasgοw. He is considered a specialist in illegal trafficking of antiquities. In 2013 he won the annual Award for Art Protection and Security from the Association for Research into Crimes against Art.

He stressed that one shouldn’t be surprised that Christie’s attempts once more to auction antiquities which do not have clear legitimate titles.