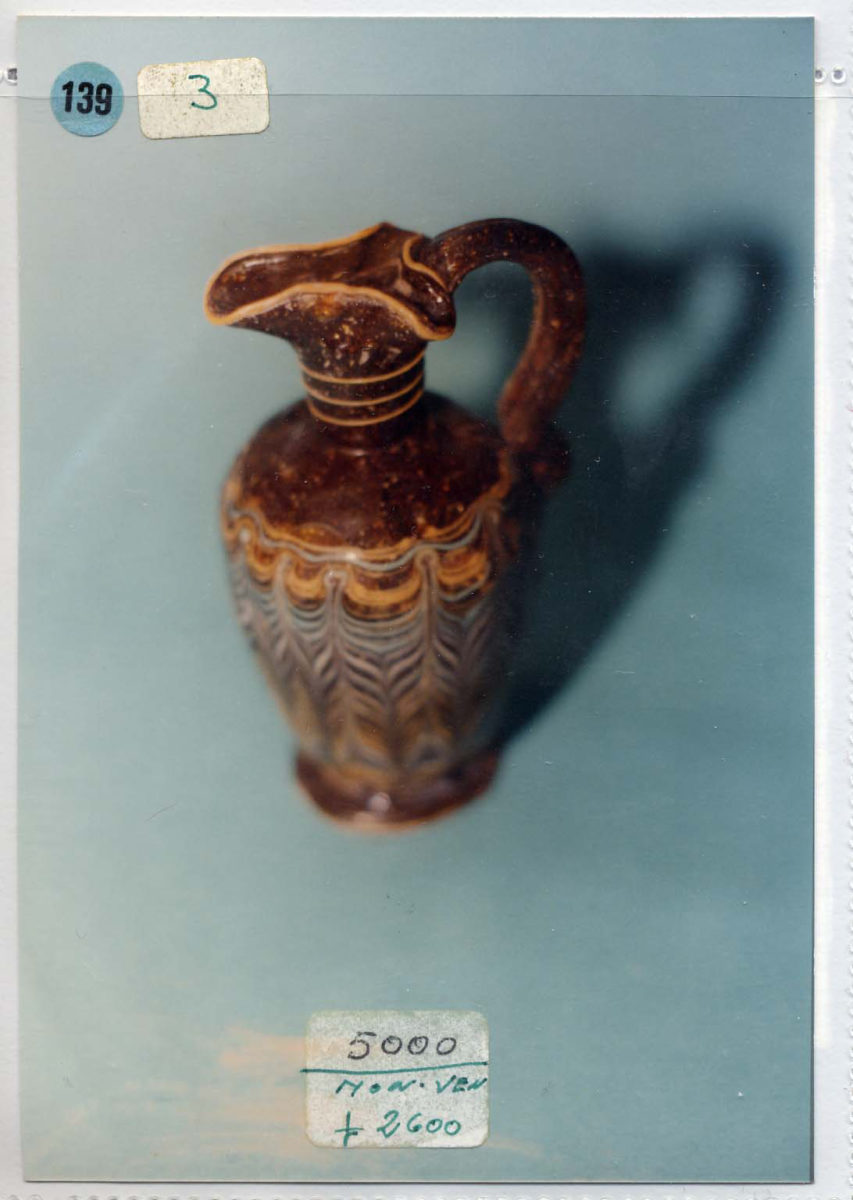 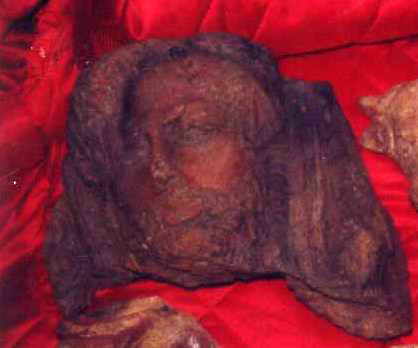 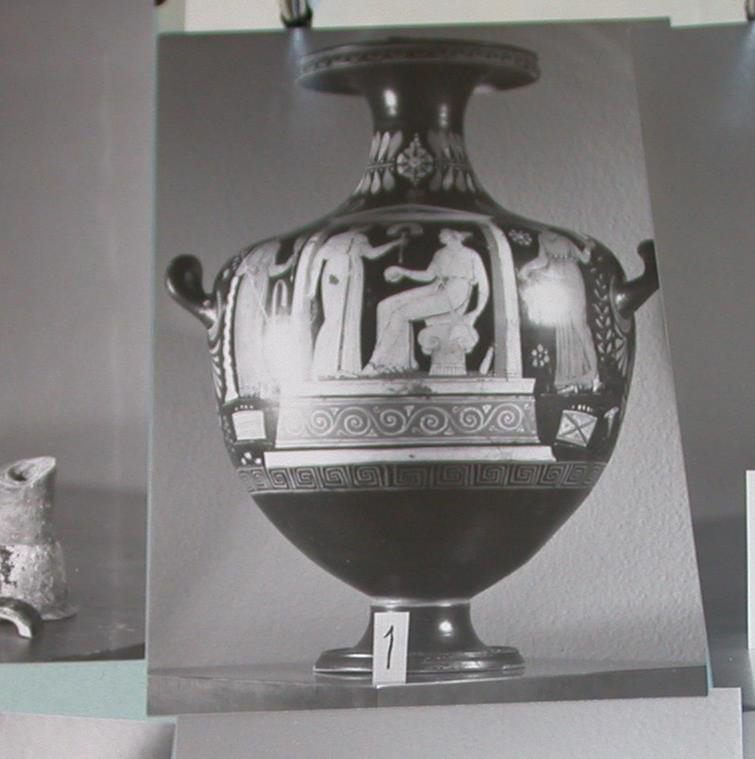 Christie’s and the Italian authorities

Christos Tsirogiannis, Lecturer at the Association for Research into Crimes against Art, filled us in on details and questions not raised by recent publicity surrounding the return of antiquities to Italy by Christie’s.

In March 2014 Christos Tsirogiannis identified an ancient Greek glass wine jug (‘oinochoe’) in the Christie’s antiquities auction catalogue for the sale of April 2, 2014 in London. The oinochoe was depicted in an image from the confiscated archive of the notorious and convicted antiquities trafficker Giacomo Medici.

At the same time Mr. Tsirogiannis also identified an ancient Greek ‘pyxis’ in the Bonhams antiquities auction catalogue for the sale of April 3, 2014, again in London. The pyxis was depicted in Polaroid images from the confiscated archive of the notorious and convicted antiquities trafficker Gianfranco Becchina.

The two cases featured on page 3 of The Times in London on April 2, 2014 and both the objects were withdrawn from the sales of the auction houses. In particular, in the article written by Peter Watson (notified by Christos Tsirogiannis), a Christie’s spokesperson expressed gratitude to The Times for bringing to Christie’s attention the information about the Medici image of the oinochoe. However, on the same day, above the online version of The Times article appeared the note: “This article is the subject of a legal complaint from Christie, Manson & Wood”, apparently as a result of a Christie’s legal complaint to The Times. The case was immediately reproduced by BBC and has been presented by various newspapers and media around the world. See below only some examples:

Looting Matters: “The Medici Archive and a London sale”

E-net “Eleftherotypia”: “Αναγνώρισαν ότι ήταν κλεμμένα” [“They admitted the artefacts were stolen”, the article is in Greek]

ARCAblog: “Dr. Christos Tsirogiannis matches two objects up for auction in London with objects identified in the Medici and Becchina archives”

A few weeks later the note above the online version of The Times article was removed.

The following year, in March 2015, Christos Tsirogiannis identified four antiquities in the Christie’s antiquities auction catalogue for the sale of April 15, 2015, again in London. Three of the antiquities identified were depicted in the Becchina archive (a black figured amphora, a terracotta bottle and a hydria), while one (an Etruscan antefix) was depicted in the Medici archive. All four antiquities were immediately withdrawn by Christie’s. The cases were published by “The Scotsman” newspaper in Glasgow and the information was reproduced by various media, e.g.:

On February 12, 2019, during an official ceremony that took place at the Italian Embassy in London, it was announced by the Italian Embassy in London and Christie’s that 8 antiquities were returned to Italy; among them were the oinochoe identified in Christie’s in 2014, and the antefix and the hydria identified in Christie’s in 2015. In the press release, there was no mention of the withdrawal of these three antiquities just a day before their auctions (because Christos Tsirogiannis identified them in the 2014 and 2015 sale catalogues and the identifications were published by various media soon after). Further, Christie’s stated that the antiquities “were returned voluntarily”, while the Italian Embassy in London stated that the restitution of the artworks “was made possible by the relationship of trust and collaboration that the embassy has developed over the years with Christie’s. It was the first ever instance of such close collaboration between the Italian state and a private auction house”. The event was attended by Alberto Bonisoli, the Italian Minister of Cultural Heritage and Activities, Raffaele Trombetta, the Italian ambassador to London, Brigadier General Fabrizio Parrulli of Italy’s Carabinieri Command for the Protection of Cultural Heritage, the CEO of Christie’s Guillaume Cerutti and the auction house’s Deputy Chief Executive Officer, Stephen Brooks.

The restitution of these antiquities was reported by various media, e.g.:

However, last week, March 7, 2019, Peter Watson published a ‘Thunderer’ on page 26 of The Times (“Auction houses are too careless about looted antiquities”), stating that the restitution of the oinochoe was due to Christos Tsirogiannis’s work and the presentation of the case by that newspaper in 2014, and not due to a voluntary action by Christie’s.

According to Christos Tsirogiannis, there are several issues that need to be addressed further regarding this case; some of them are:

a) How ‘voluntary’ was, in the end, the restitution of the oinochoe by Christie’s, especially after their 2014 legal complaint against The Times?

b) Why are Christie’s and the Italian Embassy in London, officially in a ‘relationship of trust and collaboration’, not presenting the truth regarding the way these antiquities were identified, withdrawn and – finally – returned?

c) Why do Christie’s and the Italian Embassy in London not refer to the criminals and convicted dealers involved, such as Medici and Becchina, and the proofs for the identification, claim and the restitution of these antiquities?

e) Did the Italian authorities take any legal action against the convicted dealers and the other individuals involved in the trafficking of these antiquities, now accepted by everyone to be illicit?