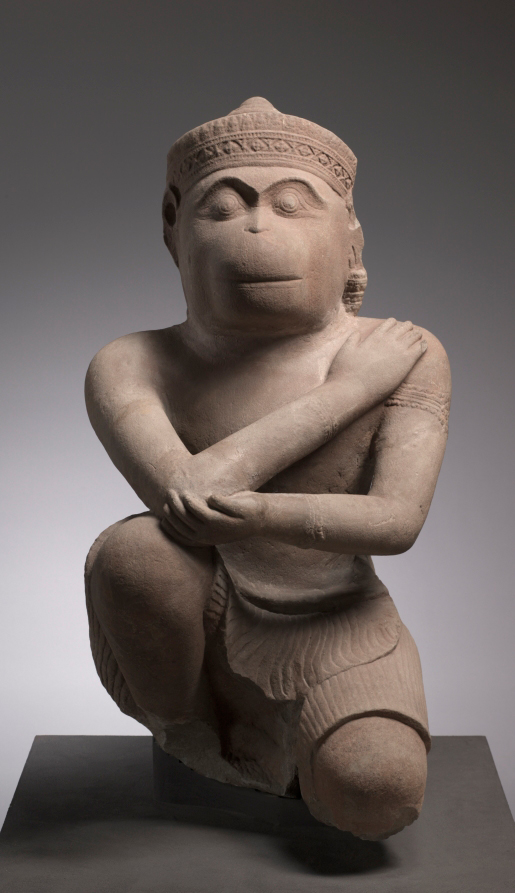 Hanuman statue to be repatriated after all

From Cleveland to Cambodia

According to a press report published almost one year ago (on May 14, 2014) in The Phnom Penh Post however, the museum at first contested “Cambodia’s claim that the kneeling Hindu monkey god was pillaged from the Prasat Chen temple. (…) the museum sent one of its curators to Cambodia last winter to investigate the origins of the Hanuman statue. Equipped with a replica of the statue, the art historian could not make a match with any of the temple’s empty pedestals. Cambodian officials said they were not aware the museum had conducted the investigation.

“‘It’s surprising they would say it’s not from there. We’re sure this monkey is from the Koh Ker [complex],’ Ministry of Culture and Fine Arts heritage director Hab Touch said.

“Archaeologists from the French School of Asian Studies helped the government identify the looted statues of Prasat Chen using tableaus of the full scene of the temple as well as of the nearby Banteay Srei temple.

“Youk Chhang, director of the Documentation Center of Cambodia, said the investigation is a “politically and strategically motivated” defence, not a search for truth.”

According to the announcement made by the museum yesterday, the museum acquired the sculpture of Hanuman in 1982 from the late Robert H. Ellsworth, a dealer in New York City. He acquired the sculpture from the estate of Christian Humann, whose collection was known as the Pan-Asian Collection. In 1977, the sculpture was published in the catalogue of the landmark exhibition entitled Sensuous Immortals: A Selection of Sculpture from the Pan-Asian Collection, and it traveled with that exhibition to four museums in the United States. Since its acquisition by the museum, the sculpture has been widely published and almost continuously on display in Cleveland.

In 2013, after a scholarly article and related newspaper reports suggested that the Cleveland Hanuman may once have been part of a sculptural tableau in the east gate of the temple complex known as Prasat Chen at the massive site of Koh Ker, a former capital of the Khmer empire, the museum undertook new research into the provenance of the sculpture. In January 2014, Dr. Sonya Rhie Quintanilla, the George P. Bickford Curator of Indian and Southeast Asian Art, went to Prasat Chen, other sites at Koh Ker, museums and storage facilities throughout Cambodia, and the offices of APSARA (Authority for the Protection and Management of Angkor and the Region of Siem Reap) in Siem Reap to investigate reports that archeologists had discovered the pedestal of the Cleveland Hanuman. In addition, she met with Cambodian officials and archaeologists in an effort to obtain more information about the provenance of the sculpture. Although that work did not lead to the discovery of physical evidence linking the Hanuman to Prasat Chen, Dr. Quintanilla continued to pursue her research over the course of the next eleven months. During that time, she discovered that the head and the body of the sculpture had been offered for sale in Thailand in 1968 and 1972, respectively.

By December 2014, Dr. Quintanilla had gathered enough information to satisfy the museum’s director, Dr. William M. Griswold, that the sculpture had in all likelihood belonged to the east gate of Prasat Chen. Dr. Griswold informed the leadership of the Board of Trustees who authorized him to initiate discussions with the Cambodian government concerning the return of the Hanuman.  Dr. Griswold then contacted officials in Cambodia and arranged to go to Phnom Penh in February 2015 to discuss the museum’s findings as well as ways that the museum might work more closely with Cambodia. While in Phnom Penh, Dr. Griswold was shown the results of the new excavations at the east gate of Prasat Chen carried out under the auspices of the Cambodian government in June of 2014 that linked the sculpture to the site.

While the government of Cambodia agrees that the museum’s acquisition of the work in 1982 was entirely proper, the museum determined that the facts represent a unique set of circumstances that justified offering to return the sculpture to Cambodia.  The Hanuman’s return will help in the recovery of Cambodia’s culture after decades of hardship and will permit the government of Cambodia to reconstruct the tableaus from the western and eastern gates of Prasat Chen.