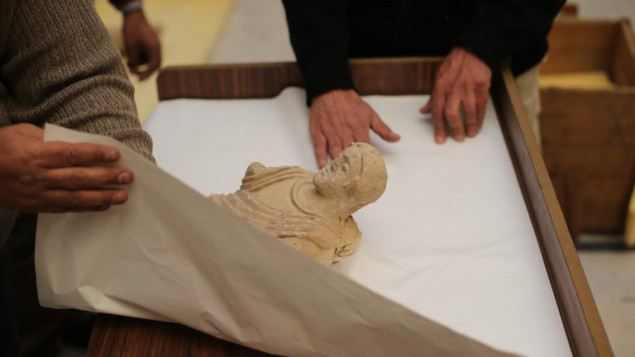 Including 69 antiquities and 8 mosaic panels reclaimed from Lebanon

Syrian authorities confiscated and reclaimed 6000 pieces of looted antiquities trafficked by the terrorist organizations during the past period, including 69 antiquities and 8 mosaic panels were reclaimed from Lebanon.

“GDAM has taken a series of measures to preserve the museums from terrorists’ robbery, on top, closing some museums after emptying them and moving most of antiquities from the areas controlled by terrorists such as Deir Ezzour, Dara and Homs and putting them in safe places,” Director of museums in the General Directorate of Antiquities and Museums (GDAM), Ahmad Deeb said.

GDAM has also notified international organizations such UNESCO and INTERPOL on the photos and documents of looted antiquities, calling on these organizations to cooperate and coordinate for reclaiming all the Syrian antiquities trafficked by the terrorists outside the country.

It should be noted that six Syrian sites are on the World Heritage list compiled by UNESCO.

There is also an emergency Red List of Syrian cultural objects at risk, published by ICOM, “with the aim to help art and heritage professionals and law enforcement officials identify Syrian objects that are protected by national and international legislations”. The pdf can be downloaded here.